There is no harm in the bonding of pan-masala in Gujarat, this rule has come into force from today.

There is no harm in the bonding of pan-masala in Gujarat, this rule has come into force from today. 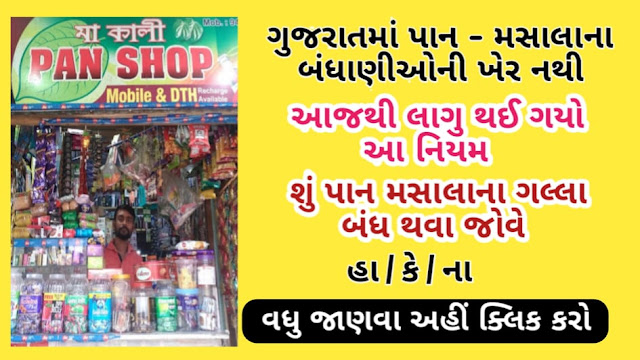 Tantra is taking action against the growing pan masala shop in the state. An important decision has been taken by the Gujarat Pan Masala Shop Owners Association in the middle of Corona. From today, it has been decided that the masala will be available only at Paan Parlor. Spice making is prohibited in paan parlors. The decision has been taken by the Pan Masala Shop Owners following the corporation's proceedings. According to the association, giving a parcel pack would cause congestion as well as dirt. The shop owner has been fined Rs 10,000 for spitting outside a pan parlor.

Due to the worrisome situation of Corona's case, a team from the Central Health Department has reached Gandhinagar in Gujarat. The team met CM Vijay Rupani in Gandhinagar and discussed the Corona case as well as the work being done by the government. After that a press conference was held and the entire matter was briefed. Amid rising cases of corona in Gujarat, a central health team has visited the state.

The team reviewed the condition of Corona in Ahmedabad and Surat. NITI Aayog official Vinod Pol said that he had a meeting with a health officer in Surat yesterday. Corona's transition was also discussed with CM Vijay Rupani. The central health team praised Gujarat and said that the strategy in Ahmedabad had reduced the number of cases.