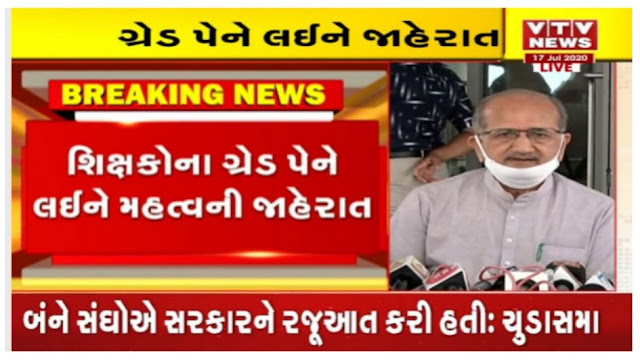 The government has made an important announcement regarding the grade pay of 4200. Education Minister Bhupendrasinh Chudasama made an important announcement in this regard. He canceled the old circular for the time being and gave good news to the teachers. For the last few days, a campaign has been going on in this regard by teachers in which VTV has also joined. Finally, good news has come from Gandhinagar for the gurudwara.

65000 teachers of the state will be benefited by this decision

Bhupendra Singh Chudasama further said that post-2010 teachers would benefit from this decision. The teachers were losing more than Rs 8,000 crore due to the controversial circular. Government has canceled the letter on 25/6/19. Now not a single teacher will suffer financial loss. A policy paper will be issued next time. In the next two months, teachers will start getting benefits. All teachers entitled to 4200 grade pay will benefit.

What is the dispute regarding teacher's grade

Important decision regarding order of study for the year 2020-21 in the state
The Education Minister further said that keeping in mind the Corona crisis, the syllabus for the current year 2020-21 has been reduced by the government. In this regard, Education Minister Bhupendrasinh Chudasama has announced that the curriculum will be reduced this year due to Corona's Kahar. Which will have the same curriculum as the work in the next standard. The decision to remove the chapters will be taken by the Education Department. The same chapters will be held to a higher standard. Government should not attend the course