Rising corona prevalence in the country: one or two states did not reapply the lockdown

Rising corona prevalence in the country: one or two states did not reapply the lockdown 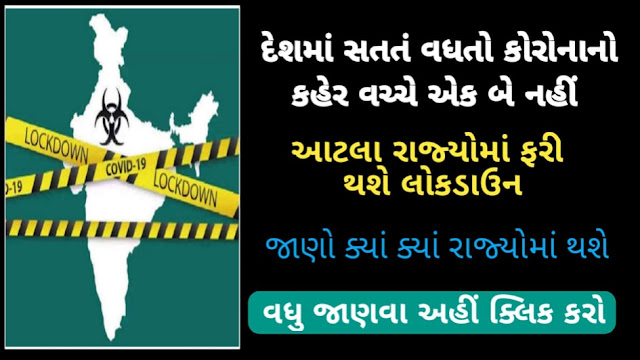 The number of coronary hemorrhage patients in the country has increased to more than one million. Yet this figure is growing rapidly. Various states and cities across the country are again implementing full or partial lockouts to prevent the spread of corona.

Two day lockout in Uttarakhand
Uttarakhand Chief Minister Trivendra Singh Rawat said that to prevent the spread of corona virus, a decision has been taken to complete the lockout in the state on Saturday and Sunday. The guidelines for which will be announced soon.

Lockout in some districts of Odisha from 17 to 31 July
The Odisha government said that full lockout has been done in Ganjam, Khordha, Cuttack, Jajpur district and Rourkela Municipal Corporation area from 17 July to 31 July. Only emergency services and those involved will be exempted during lockdown.

15 day lockout in Bihar
In Bihar, the situation is worsening due to corona. The Bihar government has announced a full 15-day lockout to prevent the spread of corona. Full lockout will continue in Bihar from 16 to 31 July. During this time, only emergency services and life necessities will be available.

Lockout is done two days a week in Uttar Pradesh.
Earlier, in Uttar Pradesh, a lockout was decided two days a week on Saturday and Sunday. Due to the mini lockdown, offices and markets will now be open only five days a week. A five-day week has been implemented to prevent the spread of corona in Uttar Pradesh. Only shops selling vegetables, milk etc. will be allowed on Saturdays and Sundays. Extensive cleaning and sanitation work will be done during these two days. While four areas of Lucknow have been completely locked out. A week-long lockout has been done at Ghazipur, Aashiana, Indiranagar and Sarojini Nagar in Lucknow.

Complete lockout in Sohna, Haryana
Towards this end, complete lockout has been done at Sohna, Gurugram, Haryana from 17 to 28 July. The decision was taken in a meeting chaired by Haryana Chief Minister Manohar Lal Khattar.

Three day lockout in Goa
A three-day lockout has been held in Goa since Friday to curb the growing trend of Corona. A large number of police have been deployed on the road for strict enforcement of the lockdown. The government has announced a public curfew on August 10 from 8 am to 6 am.