Government has announced summer vacation in Gujarat, new academic session will start from this date

Government has announced summer vacation in Gujarat, new academic session will start from this date 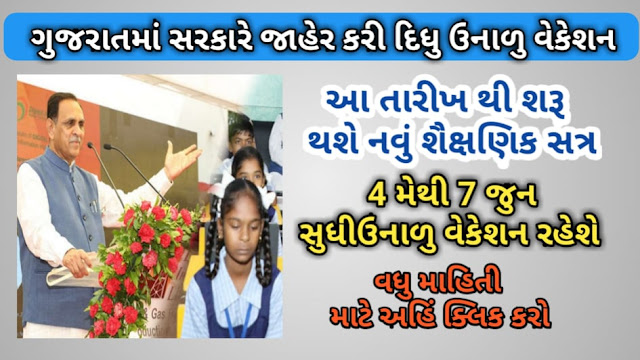 Chief Minister Vijay Rupani has made it clear that the lockout will not be completely stopped from May 3 due to rising cases of corona in Gujarat. Under these circumstances, it is clear that educational institutions, including state schools, will not open soon, while the state's director of primary education has announced holiday dates in the state. All government and private school-colleges in Gujarat are closed following the government order to suspend the academic work and schools by postponing examinations with Korba lockout. Summer leave of primary schools has been declared as per the order of the Director of Primary Education.

There will be summer holidays from May 4 to June 7 and the new academic session will begin from June 8. If the onset date changes due to the corona epidemic, it will be reported separately. Educational work in the state's primary schools has been stopped since March 16 due to the corona virus epidemic. The Board of Education has changed the rules for classroom promotion for Standard 9 and 11 students due to the Coro epidemic.

So that if students in standard 9 and 11 have less than 33 marks, they can pass by giving gessing marks. The school principal has been given special privileges for this.

Principal will be able to pass the student by giving 20 grace marks.

Privileges given to the Principal of the school

The marks of the annual examination will be given to the student based on the marks obtained in these three examinations. However, if a student is unsuccessful, it will be passed with grace. Principals can give as many grace marks as they want. Also, since practical exam is not taken in STD. 11 science, it has been said to keep the field empty. This year, special powers have been given to the principals of the adequate school by the Board of Education.