Note: These rules for withdrawing cash from ATMs are changing after June 30

Note: These rules for withdrawing cash from ATMs are changing after June 30 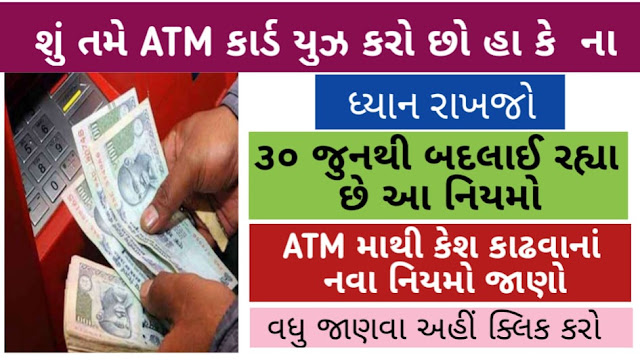 Soon after the lockout was announced in the country in view of the Corona virus, Finance Minister Nirmala Sitharaman said on March 24 that the ATM fee was being withdrawn for three months. After the Finance Minister's announcement, ATM card holders were able to withdraw cash from any bank's ATM. Under this, they will not have to pay any charges for additional transactions. This discount was only for the months of April, May and June. Now that this exemption is expiring, no information has been received from the Finance Ministry or banks to continue it.

With this announcement, the Finance Minister also announced the removal of the average minimum balance in the bank savings account for three months. However, the State Bank of India ended the minimum balance rebate for its customers on 11 March. The Finance Minister further announced that digital business transactions are also being curbed. Meanwhile, Minister of State for Finance Anurag Singh Thakur said that the decision was taken so that at least people go to bank branches to withdraw cash.

SBI will not charge minimum balance

The country's largest bank said in a statement on March 11 that no charges would be levied on all 44.51 crore savings bank accounts of SBI for not maintaining average minimum balance. Earlier, it was mandatory to have at least Rs 3,000 in SBI's savings accounts in metro cities. Similarly the amount for semi-urban and rural areas was Rs 2000 and Rs 1000 respectively. Earlier, SBI used to charge Rs 5-15 more tax from customers for not keeping minimum balance.

What is the rule related to ATM transaction limit

Generally, any bank offers free transactions 5 times a month. For ATMs of other banks this limit is only 3 times. For ATM transactions above this limit, banks charge Rs 8 to 20 more from customers. This fee also depends on how much the customer transacts.