This rule has been implemented new for drivers in Gujarat.

This rule has been implemented new for drivers in Gujarat. 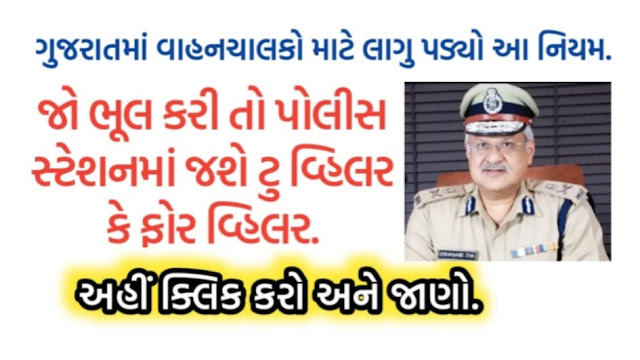 If they make a mistake, they will go to the police station, not at home. Two wheel or four wheel vehicle. The people of Gujarat state are not strictly following the lockdown and now lockdown 2.


In the last week of Gujarat Director General of Police Shivanand Jai 0. is closing his eyes to strictly follow. In order to prevent corona, the movement of people will be reduced to reduce contact between people and from now one and four on two-wheelers.

People of Gujarat state are not strictly following lockdown and now lockdown 2. DGP Shivanand Jai of Gujarat is following strictly in the last week of 0.

If more than one person is riding on a two-wheeler and more than two people in a four-wheeler, the vehicle will be stopped to reduce the movement of people and reduce contact between people.

State police chief Shivanand Jai said today, "Sitting together does not follow the rules and the police will take strict action in this regard." The Chief Minister has also suggested that masks and social distance be used to avoid this infection. Mandatory implementation.

People in areas where there are few or few cases need to be especially vigilant. People in such areas should follow social distance. Strictly follow lockdown


tate DGP Shivanand Jai appealed to the citizens to strictly follow the lockdown and not misuse the concessions given.

The DGP said that the system had given permission to open shops in Godhra. But the state government has decided to close the shops again, as other rules including social distance are not being followed. Therefore, there will be a complete lockout in Godhra.

For this, another SRP team has been allocated in Godhra. The DGP said that two accused who attacked the police in Surendranagar.

The case is prosecuted under the opposite aspect. Giving details of the crimes in the state, he said that 74 crimes were registered yesterday based on CCTV footage. While 19 crimes have been registered for spreading false rumors.