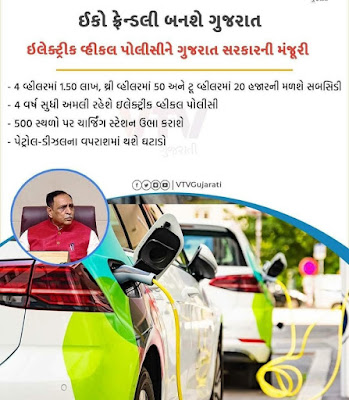 Announcing the Gujarat Electric Policy-2021, Chief Minister Vijay Rupani expressed hope that this policy will give a boost to new technology of e-vehicles.

Emphasis has been laid on increasing the use of electric vehicles, making it a manufacturing hub for production of e-vehicle equipment and encouraging young startups and investors in the electric mobility sector, three wheelers and 20 thousand four wheelers. The cost per km of consumption of this e-wheeler is 30-50 percent less as compared to other vehicles.

Consumption of 4 lakh e-vehicles will result in saving of Rs 5 crore in fuel. Noting that the carbon emissions are estimated to be less by 6 lakh tonnes, Rupani said a subsidy of Rs 10,000 per kWh would be given for the purchase of e-vehicles. Gujarat is the leading state in providing subsidy per kWh across the country.

This subsidy will cost the Gujarat government Rs 870 crore. A subsidy of Rs 20,000 for electric two wheeler, Rs 50,000 for three wheeler and Rs 1.50 lakh for four wheeler will be given.

Subsidy of Rs.10,000 per kilowatt vehicle for purchase of e-vehicle

Subsidy will be given regardless of vehicle type

Petrol pumps to be allowed for charging stations

Planning to install charging stations in housing and commercial construction

Consumption of e-vehicles will save Rs 50 million in fuel, reduce carbon emissions by 6 lakh tonnes 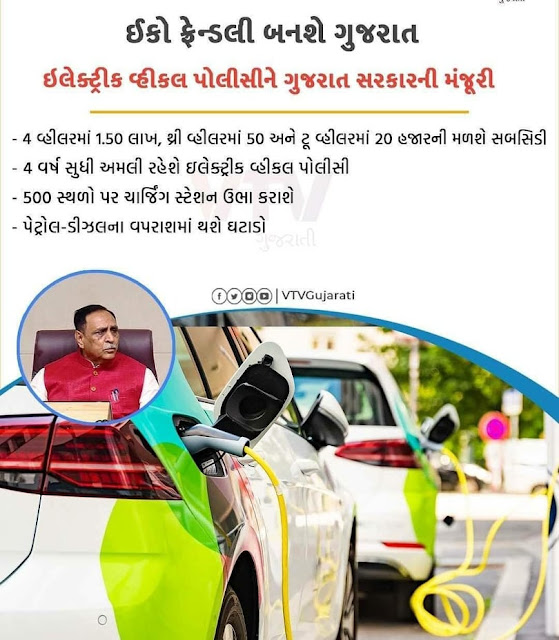 Special provision has been made for setting up charging stations in residential and commercial constructions. It has been decided to encourage e-vehicle manufacturers under other policies including Gujarat Industrial Policy. The State Government has entrusted the responsibility of effective planning, implementation and review of this policy to the Port-Vehicle Transactions Department.