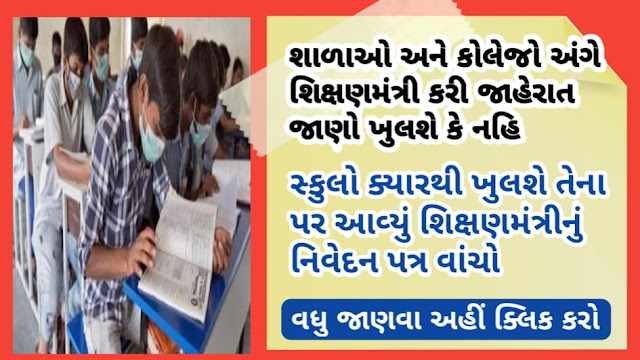 Millions of parents across the country are thinking about opening schools due to the Coro epidemic. Hence some groups have appealed to the Prime Minister not to open the school at present. According to the Union Ministry of Education, the situation is being assessed and any further decision can be taken on that basis.

Regarding the plan to open schools exclusively for primary students, Union Education Minister Ramesh Pokhriyal Nishank said, "Under the guidance of Unlock 3, the Ministry of Home Affairs directed the closure of schools, colleges and all coaching institutes by 31 August Is. Home in the near future. We will decide according to whatever guidelines come from the ministry. '

Education Minister appealed to states not to open schools and colleges

Parents' groups have appealed to the Prime Minister, Union Education Minister and Chief Ministers of various states not to open schools at present. On the other hand, the Delhi government wants schools to open as soon as possible. According to Delhi government, it is very important for the students to go to school and the overall development of the students can take place in the school itself.

Currently, all schools across the country will remain closed until August 31 in view of the Corona infection. Therefore, any new decision to open the school can be taken only during the month of September.

Please tell that schools will start from September 1

According to a message viral on social media, schools are open from 1 September. However, the central government has made it clear that it has no intention of opening the school until December. The government news agency also tweeted that the government has not taken any decision yet.