Television is starting a huge show for viewers at home, now the children will be happy

Television is starting a huge show for viewers at home, now the children will be happy

The country currently has a 21-day lockdown to control the transmission of the corona virus. All film and TV serials have been shot and repeat telecasts are coming on television. The 90s superhit shows are also being broadcast on television. This has also increased the TRP of the channel. Many shows including Ramayana, Mahabharata, Shaktimaan have returned. Now a show for children is about to start 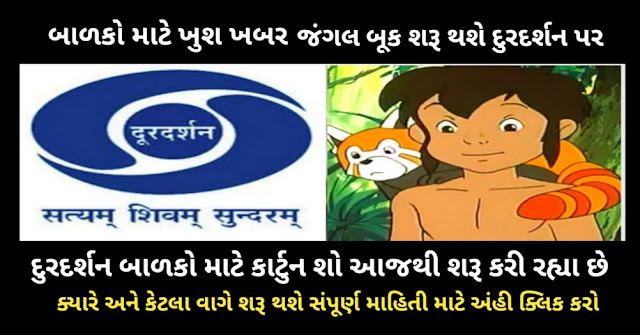 Now Mowgli's children's favorites are also set to return to television in the same order. The most popular Jungle Book on television will air on 8 April. Doordarshan shared this information on Twitter and said, Doordarshan Parjung Book. Watch your favorite show every day at 1 pm. Starting tomorrow, 8 April. Not only this, the premiere of Ramesh Sippy's show will also be telecast again on television.


Giving information about this, Doordarshan tweeted that the show will begin at 5 pm under the direction of famous director Ramesh Sippy. The show will be broadcast daily. Let us know that Doordarshan has also started airing Shah Rukh Khan's TV show Circus. Talking about The Jungle Book, children's favorite cartoon show has also been a favorite of the elders. Mowgli and Bagheera's friendship is very famous

As you can tell, the biggest benefit from the return of these shows on television is that the channel's TRP has increased. All these shows were very popular at that time and people did not even have cable connection. DTH was also seen by a small number of people, and most were entertained by television viewing.