Farmers protesting the agriculture law imposed by the central government have announced a nationwide bandh on 8 December. Opposition parties your have said that they will not run in the by-election. In this regard, Gujarat CM Rupani has clarified that strict action will be taken against those forcibly closing in the state. He also targeted the opposition. In the name of the peasant movement, the Congress is struggling to save its existence. 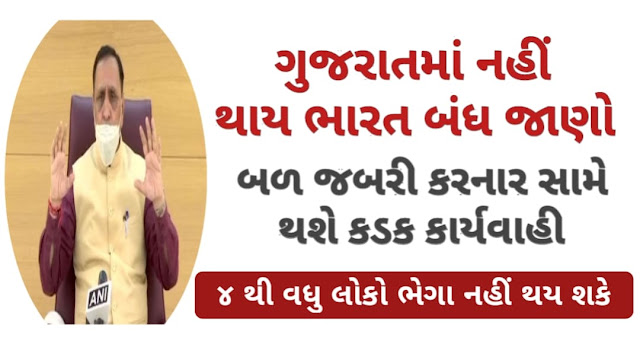 Yesterday, Chief Minister Vijay Rupani pulled the Congress over the Bharat Bandh of farmers. CM Rupani said that this is a political movement of Congress and Opposition in the name of farmers. Have joined the movement for its existence. And trying to mislead farmers. CM Rupani reminded the Congress of its manifesto on the farmers' movement. He said in the manifesto that if the Congress comes to power, it will amend the Agriculture Act. Rahul Gandhi abolished the Commodity Act by meeting with the Chief Minister. So when Sharad Pawar was the Agriculture Minister, he was in favor of amending the APMC Act. CM Rupani also said that Gujarat will continue. Farmers in Gujarat have no support for the dam. He also clarified that strict action will be taken against the law and order situation forcible closure and the mess.

Gujarat Police has also become active after the announcement of Bharatbanda yesterday. The DGP gave this information in a press conference today. Additional police arrangements will be made to prevent any untoward incident tomorrow. Strict action will be taken against anyone who violates law and order. Police will be tight-lipped on the district border.

No more than 4 people can gather