If the team is more than 100 people ready to count the guests at the wedding, the fine and the first FIR registered here

If the team is more than 100 people ready to count the guests at the wedding, the fine and the first FIR registered here

The wedding season has started after Dev Uthi Ekadashi. India is the only country. Where marriage is also like a festival. The government has imposed several restrictions on marriage in view of the corona virus epidemic. According to the guidelines, a marriage can involve a maximum of 200 people. State governments can increase the number of guests to 100 or less. The Delhi government has reduced the number of wedding guests to 50 due to Corona. Apart from these guests, photographers and videographers are also included. Caterers alone are not counted at 100. 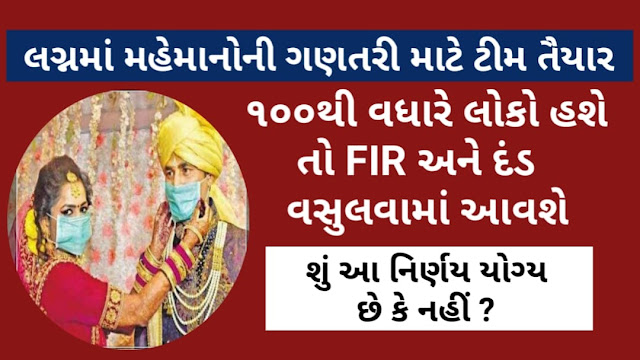 Teams have been formed in various cities to monitor the number of guests at the wedding. If more than 100 people show up at the wedding, the organizer will be fined Rs 25,000. In addition, the case can be prosecuted by filing an FIR for violating the Pandemic Act and endangering human life. Necessary instructions have been issued to all magistrates and field officers in this regard.

The first FIR was lodged in Meerut

Not following the Corona guidelines and not maintaining social distance during the wedding ceremony in Meerut, Uttar Pradesh, has affected the family heavily. A case has been registered here against the owner of the guest house along with the father of the bride. ASP Kent Irj Raja says that the band Adi should not be more than 100 together during the Ray wedding ceremony, but 300 to 350 people were seen here. So that this action has been taken. No sanitizer was arranged at the wedding, police rushed to the scene, reported it and informed the authorities. Based on this information, a case has been registered against 3 people.

It is important to follow these rules in marriage