The matter of opening the school will be decided after taking the opinions of the staff, teacher, principal and parents

The matter of opening the school will be decided after taking the opinions of the staff, teacher, principal and parents

After the central government allowed schools and colleges to open, the state government has started considering opening schools after the Diwali holiday after 30 November and for which a practice has been started. The government is responsible for holding meetings and taking opinions. 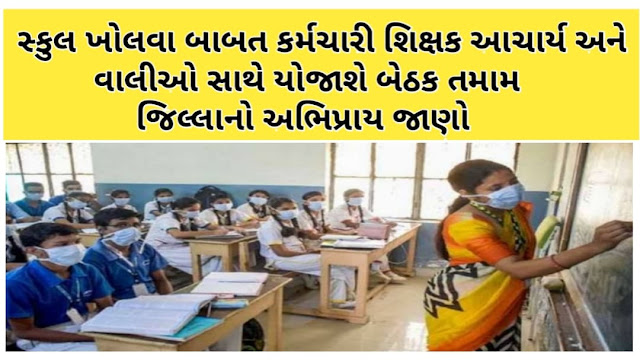 In addition, due to the migration of parents due to corona, the number of children in many schools is decreasing.

On the other hand, given the representation of schools, it has been decided not to reduce the class. Therefore, at each DEO level, classroom reduction proposals have also been abandoned. Recently Diwali holiday schools have been announced by the government on 15 November. Every year after Diwali, 15 days holiday is given till Diwali. But this year, as Corona does not have an academy calendar, teachers are given 15 days before Diwali and four days after school leave.

So the government is planning to start school-classroom education by calling some students at primary level 11-12 in a few days after Diwali. The teachers have complained that the teachers who went to the village after Diwali have to return immediately. Apart from this, the system of booking tickets for the Diwali holiday by teachers has also been disrupted.

The process of determining SOP has been initiated by the government with plans to open schools in November after Diwali holiday. is. Forms are also prepared with some general questions for the survey. The Ahmedabad City DEO held a meeting with all ten Beat Coordinators in the city, where suggestions were made.

As suggested by the DEO and districts, it is generally agreed that 10–12 schooling should be started with some students. However, administrative staff has suggested that employees are prepared to do all the work and be vigilant. The department and the health department have to take responsibility. The school-staff should not be blamed for anything. It is important.

After receiving feedback from each district, a report will be submitted to the government by the Board-GCERT and the Department of Education and a specific SOP will be decided on the basis of that.