Unlock 5.0 guidelines will be released today

Unlock 5.0 guidelines will be released today


While the deadly corona epidemic is still raging across the country, the lockdown imposed amidst the corona epidemic is being opened up at various stages. So far, the government has made several concessions in Unlock-4 and opened up the economy. Under this, new guidelines for unlock-5 (unlock-5.0) can be released today, 31 October. 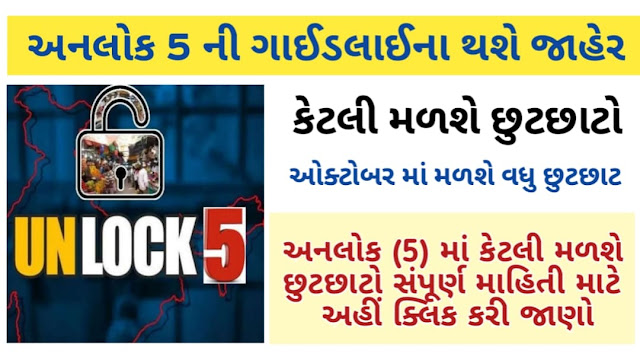 The longest running festival season in India starts in October. It will be interesting to see what the government gives now and what it prohibits. Significantly, last month, the Home Ministry demanded some more relaxation and gradually gave permission for activities outside the control area. Now that industries expect consumer demand to increase at upcoming festivals, more discounts may be offered.

Chances of getting more levees

What discounts can be given in unlock-5 applicable from October?
Public places such as restaurants, salons, students, gyms are allowed to open with restrictions, cinema halls, swimming pools, amusement parks are still not open. It remains to be seen whether they will be allowed to open from October. While this request has been made several times by Multiplex Association of India. However, in the previous guidelines, the open air theater has been directed to open from 21 September.

Air theater to open from September 21

In contrast, West Bengal has permitted opening of cinema halls with limited number of people from 1 October. West Bengal Chief Minister Mamata Banerjee said that to return to normal time, Jatra, drama, open air theater, cinema and all music, dance, singing and magic shows with 50 people or less will open from October 1. However, rules of social distance, wearing masks and necessary precautionary measures should be followed during this time.

PIB denied claims of opening theater in a fact check

Last month, Amit Khare, Secretary, Ministry of Information and Broadcasting, suggested to the Union Home Ministry a way for people to sit in theaters. Accordingly, one can leave the seat and be seated on the other. One line can also be omitted.