News of relief for millions of electricity consumers of the state, Rupani government gave big gift in the scorching heat

News of relief for millions of electricity consumers of the state, Rupani government gave big gift in the scorching heat 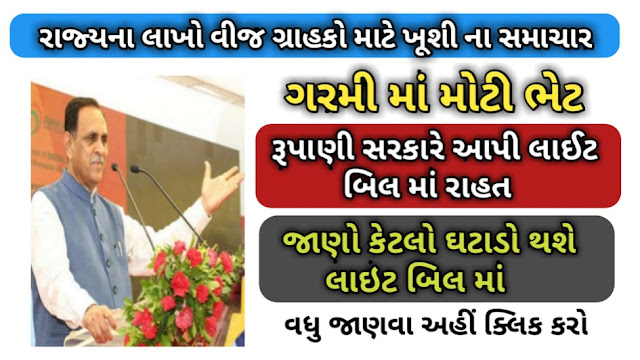 The state is experiencing severe heat at this time. There has been an increase in the case of Corona. Only then did the government take an important decision for electricity consumers. There is news of relief for millions of electricity consumers of the state. The fuel surcharge imposed on consumers by state-owned power companies has been reduced. Fuel surcharge has been reduced by power companies by 16 paise per unit.


Relief news for millions of electricity consumers of the state

Energy Minister Saurabh Patel said that with the decision of the government, more than 1.30 crore consumers in the state will get relief of Rs 310 crore. Fuel surcharge collection during the last quarter i.e. January to March 2020 was 2.06 paise per unit. But now after a deduction of 16 paise, a surcharge of Rs 1.90 per unit will be levied during the April-June 2020 quarter.


Yellow on 6th and Orange Alert on 7th and 9th May

Day by day heat is increasing in Gujarat. Then the Meteorological Department issued a yellow and orange alert for the next five days. A yellow alert has been issued on May 6 and an orange warning has been issued on May 7-9, meaning that the temperature in Ahmedabad will be 4 to 5 degrees. Whereas in different districts of the state, the temperature will fall by one to two degrees.


Ahmedabad will also get partial relief from heat

The state is experiencing severe heat amid Corona drought. So in some parts of Saurashtra, non-seasonal rains have increased the problem. The Meteorological Department has forecast no rain in the next five days. Apart from this, Ahmedabad will also get partial relief from the heat.

After which a yellow alert has been declared in Ahmedabad for the next two days. When Orange Alert is issued after three days. There will be a general drop in temperature in various districts of Gujarat.