Government's big decision: If the number plate is tampered with, it will be an offense under the IPC Act

Government's big decision: If the number plate is tampered with, it will be an offense under the IPC Act

Changes in the provisions of the Dice Act, after the goons act came into force, the government will now amend the Motor Vehicles Act and make it involved in criminal offenses. Drivers should be alerted if the vehicle number plate is tampered with or tampered with. Now a crime can also be registered against the driver of a police vehicle. And this crime will be registered and arrested as per sections of IPC. 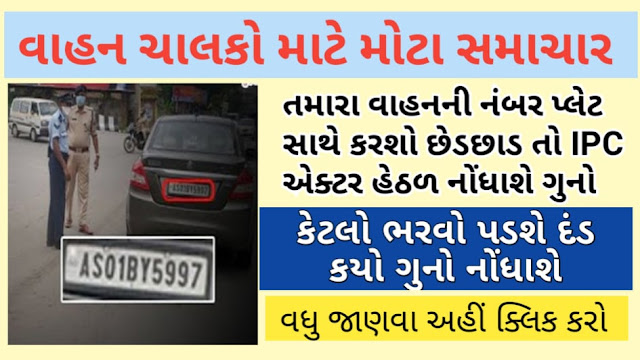 Changes in the provisions of the Dice Act, implementation of the hooliganism act and later the government will amend the Motor Vehicles Act to include criminal offenses. Can also be registered. And this crime will be registered and arrested according to the section of IPC.

The population of the city is increasing day by day and the traffic problem in the city is also increasing. The traffic police have now closed their eyes to make the drivers aware of the rules. Drivers tamper with the number plate to avoid e-memos. So now police will make drivers aware of the law. The driver who tampered with the vehicle's number plate will now be charged with a criminal offense. The traffic police has taken action against the non-bailable criminal.

Helmet will now also be fined via e-memo

The government and police department have now come out with an intention to toughen law and order because citizens are still not aware of the law. As the government strengthens law and order day by day, an exercise is being carried out to strengthen and enforce RSO's HSRP number plates to cheat the government on drivers who tamper with them Accused. In addition, e-memos have been made more active by the police. Hence after the lockdown, motorists stopped wearing helmets. Therefore, the e-memo will now attract helmet fines as well.

Tempering on the number plate will be heavy