In Gujarat Police Force, first written test will be taken in the recruitment of Armed / Non-Armed, Constable, Public Guard Male, Female, SRP Constable, Jail Constable, which will have a question paper of 100 marks. 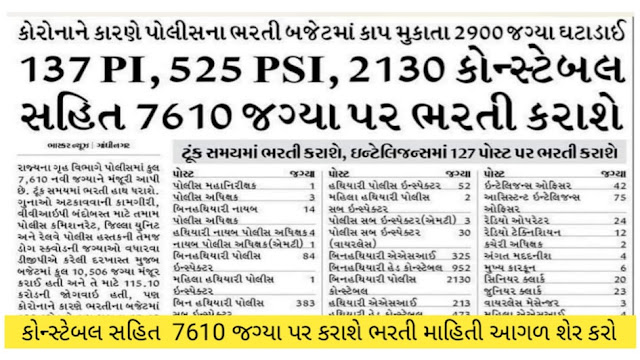 There is big news for the youth who want to join the police. In which the state government has decided to increase the establishment of the state police. Recruitment has been approved for 7610 posts in the police force. The Home Department has issued a letter.

Notably, many candidates have agitated about the recruitment process before the lockout in the state. This decision of the state government is a golden opportunity for the youth who want to join the police.

Choose your suitable jobs for the people you want to raise.

Fill all the details in the online application form such as name, qualification, DOB mentioned on the documents etc.
Upload your photo, signature and other required documents.
Use the Demand Draft if the application fee is paid online or offline.


The good news for youths seeking jobs in police is that more than 7,000 posts will be filled