Preparations begin for Unlock 3 in Gujarat, find out what will be open and what can be closed

Preparations begin for Unlock 3 in Gujarat, find out what will be open and what can be closed 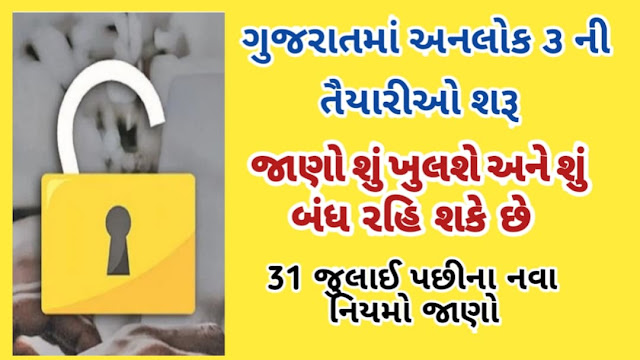 Unlock-2, which was released after the corona virus outbreak, ends on Friday, July 31. Government is preparing to unlock 3 amid Corona epidemic. The gym and theater are expected to begin in Unlock 3. Theater operators may be allowed to open a theater with 25 percent seats.

There is some resentment among administrators about the government's decision. Administrators agree to start with 50 percent seats. Managers believe the loss will be 25 per cent higher. No wonder this is a major problem in Gujarat. Let us tell you that 200 cinemas of Gujarat have been completely closed for five months now. A proposal has been sent to the Ministry of Home Affairs to open theaters in Unlock 3.

The owners of the cinema hall are willing to start the cinema hall by selling 50% tickets, but the government wants to allow only 25% of ticket sales. However, many cinema hall owners in the country are not ready to open theaters with 25% capacity.

Not only this, Unlock-3 is also likely to unlock the cinema as well as Jim Gates. Meanwhile, schools and metros are not currently being considered for opening across the country. Unlock-3 will also make some more concessions for all states, initially considering opening school-colleges, but concerned with the growing transition to Koro, the government may still keep educational institutions closed.

On 27 July, Prime Minister Narendra Modi has called a meeting with the Chief Ministers of all states. Increasing cases and unlock-3 will be discussed. With the second round unlocked on 31 July, the next strategy could also be considered.