Amidst the Corona riots, PM Modi gave a big gift to the countrymen and said about the festivals

Amidst the Corona riots, PM Modi gave a big gift to the countrymen and said about the festivals 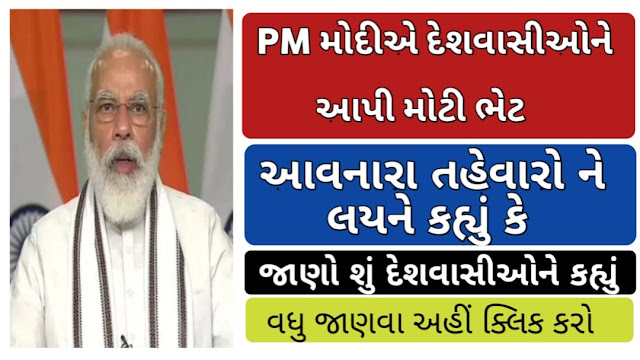 Prime Minister Narendra Modi inaugurated three new laboratories of the Indian Council of Medical Research (ICMR) in Noida, Kolkata and Mumbai through video conferencing. During this, Union Health Minister Dr. Harshvardhan and the Chief Ministers of the three states were present.

During this, PM Modi addressed the gathering. PM Modi warned about the condition of Corona as well. He also said that many scientists in the country were working day and night to find a cure for corona virus.

Today, Prime Minister Narendra Modi has inaugurated high throughput (automated) centers in the corona trial in three cities - Noida, Mumbai and Kolkata. In this center, 10 thousand tests can be done in a day. According to the Prime Minister's Office, the center will be able to speed up corona testing in the country. It will also help in getting information about the disease at a certain time and start treatment. In this way the spread of infection can be prevented.

During the inauguration of the lab, PM Modi said that. Currently more than 5 lakh tests are being conducted in the new country. Efforts are being made to conduct 10 lakh tests every day in the coming days. In Corona's time, every Indian is determined to save. Today, India is the second largest PPE kit manufacturer in the world. There was not a single manufacturer in the country 6 months ago, today more than 1200 manufacturers are making more than 5 lakh PPE kits every day. N-95 masks were also imported at one time, today 3 lakh masks are produced every day.

PM Modi said that many festivals are going to come in the coming days. Meanwhile, we all need to be more careful. At the same time, it is important to ensure that food is available to the poor. He said that till the corona virus is not treated, then we will have to avoid the corona virus by wearing masks etc., following social measures.

Corona tests have recently been extended so that a large number of cases are being reported. Earlier on Sunday, the Prime Minister had said in a Mann Ki Baat program that the risk of corona virus had not reduced yet and was still as deadly as it was before.

After inaugurating the lab, PM Modi said that now a large number of corona tests can be done in these cities too. This high-tech lab will not be limited to the corona but will also be available for other diseases including hepatitis B, hepatitis C, HIV and dengue.