3 LED bulbs will be available for only Rs 10, 15 crore families will benefit

3 LED bulbs will be available for only Rs 10, 15 crore families will benefit 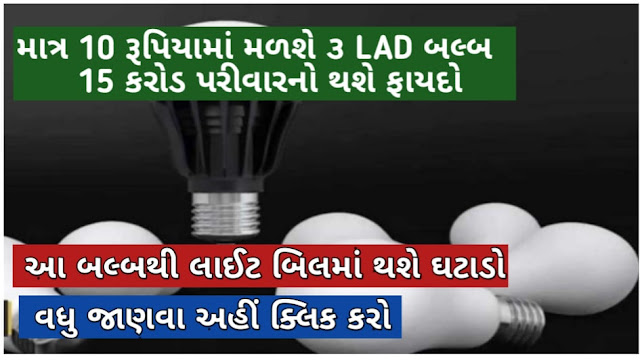 The Public Sector Energy Efficiency Services Limited ie ESL is going to start the rural Ujala scheme soon with the intention of saving on electricity bills. Under this, rural families received Rs. 3 to 4 LED bulbs will be distributed at a cost of Rs. This will benefit about 150 million rural families across the country.

The company's managing director disclosed here today that 500 million LED bulbs will be distributed under the plan of ETSL, a joint venture company of NTPC, REC, PFC and Powergrid under the Ministry of Power. They are estimated to save 12,000 MW of electricity.

3 LED bulbs to be replaced
He informed that rural Ujala program will be started soon. Work is underway on its design. Under this, each family gets Rs. Three to four LED bulbs will be provided. This scheme will be implemented in all the villages of the country in the next three to six months. No subsidy will be taken from the central or state governments for this program. The cost will be borne by EESL itself.

"Under this, if we provide three LED bulbs per household, three old bulbs will be taken according to the company's director." We will collect them, from which we will monitor how many bulbs come and how old they are. These bulbs will then perish. All this will be done under the approval of the United Nations, for which the company gets a carbon certificate.

He said that these certifications are in demand in developed countries. In those countries it will sell these certificates and charge the price of LED bulbs. The company's director said that the distribution of 500 million LED bulbs in villages across the country would reduce 12,000 MW of electricity emissions and save consumers Rs 25,000 to 30,000 crore annually on electricity bills.