This is the government's plan to defeat the dragons and strengthen Gujarat, know

This is the government's plan to defeat the dragons and strengthen Gujarat, know 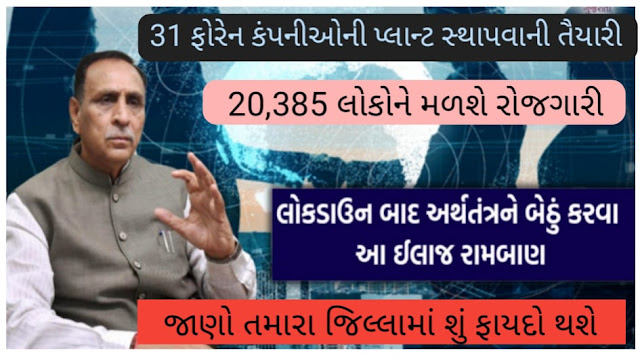 Corona has given a tough competition to the economy. However, this is good news for Gujarat. This year, 31 foreign companies have shown readiness to set up their plants in Gujarat and have demanded land allotment. This will create all new opportunities in Gujarat through employment. The central and state governments have made preparations to remove companies wishing to invest in China in Gujarat.

31 foreign companies are preparing to set up plants

20,385 people will get employment
Investment was proposed from Japanese companies
A total of 2286 hectares of land in the state has been sought from Gujarat Industrial Development Corporation by this company of 13 different countries. If the state government succeeds in allocating land to these companies, then there is no doubt that foreign direct investment will be maintained in the state even during the high flow Corona recession. Some of these companies have also received offers during lockdown. With the establishment of the plant, foreign companies invested a grand total of 61,837. It is also creating employment opportunities for 20,385 people in the state.

Investment was proposed from Japanese companies

According to the Department of Industry and Mines of the Government of Gujarat, like last year, this year too we have got very encouraging numbers for foreign investment. Even during the lockdown, we have received investment proposals from two very large Japanese companies. The required land allocation for all FDI proposals is currently being processed. Thus in the next 2 years in the state, Rs. Foreign investment of 61,000 crores will come.

The government is in constant touch with companies from the US, Japan, Europe and other countries to attract more foreign investment and is taking advantage of the current situation to offer them attractive offers from China to set up their plants in Gujarat. We are also going to announce an attractive new industrial policy for foreign investment in the near future. We currently have offers from companies based in Japan, Turkey, China, USA, UK, Taiwan, Austria, Germany, South Korea, Thailand, Belgium, Albania and Dubai.

Various offers received by the Gujarat government include proposals from reputed companies such as Daicel Corporation of Japan, Hyundai Steel of South Korea, Chico of Taiwan, Doka of Austria, ACL America of USA and Motic Electric. Coming to Gujarat, these companies will come up with projects in various fields such as engineering, chemicals, petrochemical, steel, medical equipment, auto and auto spare parts, plastics and paper. However, only 2-3 of these proposals have come in two and a half months of lockdown.