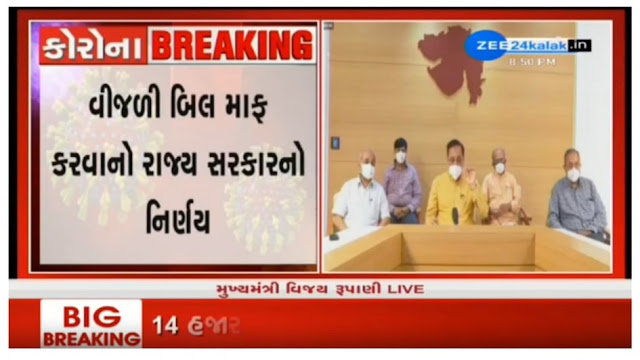 In an exclusive interview with GSTV, Chief Minister Vijay Rupani said that the electricity bill affecting 60 million people in the state is still under discussion. Also, he spoke of announcing the economic package soon. Chief Minister Vijay Rupani lashed out at the Congress over the allegations made by the Congress over the Rajya Sabha elections. In which he claimed that Congress could no longer survive. Congress is a sinking ship.


Time should be used wisely

Is now unlocked. But proper use of time is important. Yogasana Pranayama is also important for morning charging. Also one should read well and listen to music. If the mind is happy, the body is happy, time and time everything is fine, but we can stay fresh and patience can be maintained.

Tried to bring back all the students trapped abroad
The Gujarat government tried to bring back all the stranded students abroad. There was a search in the area. All Gujaratis living abroad were contacted. Regarding the parents' concerns, Vande India, in collaboration with the state and central government and the Ministry of External Affairs, has helped bring back about 5,000 people from abroad. Many are still coming and they are being arranged by the state government.

In Gujarat, two people do not need to sleep in one bed
Corona cases have increased in the state, but recovery rates are also high. In Gujarat, two people do not have to sleep in one bed. The civil hospital employee has been working day and night for the last 3 months. It is very easy to criticize the government. Not to be afraid of Corona but to be careful.

All workers will return in a month

He clarified the questions asked about Corona figures that we have not hidden any figures. He further stated that he was not afraid of Corona but wanted to be safe. Pointing to the critics, he said it was easy to criticize the government. He said of the Corona Warriors that they have been serving the people for the last three months.