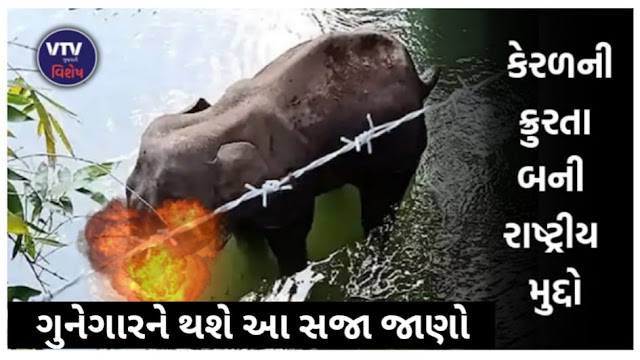 In Kerala, a pregnant elephant died after eating explosive devices mixed in her food and exploding in her mouth. This incident has now become a national issue and all the people of the country have come together to condemn this heinous incident. However, it is now revealed that the explosives were not meant to kill elephants but to kill wild boars. Although there are discussions that this level of cruelty is not appropriate for any animal.

How is it done?

Here in the food of that animal, ammunition and gelatin sticks are trapped in the intestines of the dead animal. Animals like pigs are attracted to the smell of a dead animal to eat it and as they fill the intestines with gunpowder the ammunition bursts and the animal's mouth blows and it tragically dies there. .

Pigs destroy crops; How appropriate is it to beat him with such cruelty by the fact?

Wild boar is also a problem in Gujarat. Farmers are angry at pigs and clearing the fields at night. For this, a number of tactics are used to keep them away. But bombing an animal's mouth and killing it with such vandalism is a black mark on humanity.

In Kerala, there are reports that this is due to the irresponsibility of the forest department. Activities such as mining in the area have led to frequent encounters between humans and wild animals against which brutal incidents have been reported.

Is this human currently a victim of nature's aggression?
Right now the whole world is in the grip of corona epidemic. Natural disasters like viruses, hurricanes, forest fires, earthquakes etc. are plaguing mankind. There are incidents which show that mankind has turned against nature. We have fallen prey to such a deadly epidemic because of the way some criminals working against nature are unknowingly committing violence against dumb animals.