The Corona vaccine developed by this company from India, Gujarat became a ray of hope for the whole world.

The Corona vaccine developed by this company from India, Gujarat became a ray of hope for the whole world. 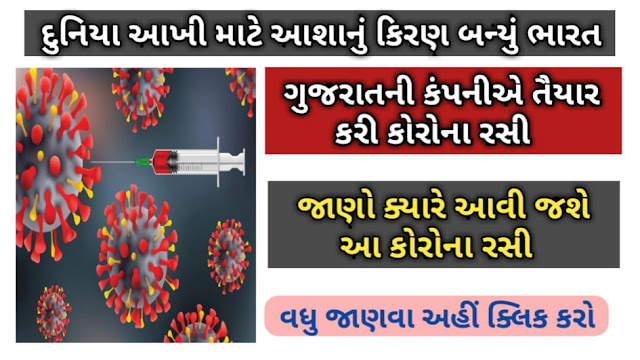 The corona virus has infected several states in India, including Gujarat and Maharashtra. Corona cases are now increasing rapidly, as well as the death toll. But there is a ray of hope for India. The country's three largest companies have developed drugs for the corona virus.

Drug Control General of India (DCGI) Dr. VG Somani said that only last week, the central government had given clinical trials to three pharmaceutical companies in the country for the vaccine needed to fight the corona virus. All these companies have been asked to produce vaccines under Fasttrack. So that the corona virus infected people can be saved as soon as possible.

These three companies are

According to an official, Indian companies Glenmark, Cadila Healthcare and Serum Institute of India have prepared vaccines against the corona virus. Early detection of the vaccine by these three companies has been shown to be very effective against the corona virus. Companies have been told that vaccines should be tested on patients under the supervision of hospitals in India. Successful medicines will be allowed to be vaccinated in the country after testing.

The serum vaccine developed at the University of Oxford is called ChAdOx1. Who will undergo clinical trials in India. In addition, Glenmark has developed a drug called kavipirvir. While Cadila Healthcare has also developed a corona virus drug called Alpha-2B. It is expected that testing of all these vaccines will begin this week.