Home
problem for the power grid


In a video message for the nation, Prime Minister Narendra Modi has called for switching off the lights for 9 minutes at 9 pm on 5 April. During this time, the Prime Minister has appealed for mobile lamp, flashlight, flashlight light. The Prime Minister's call in the fight against the Corona virus has left the power grid in a state of concern. 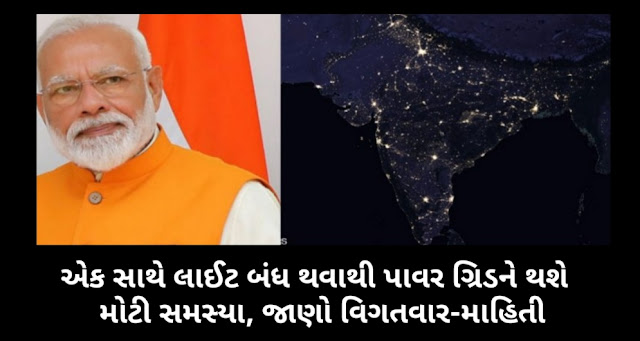 With this call of the Prime Minister, the power grid is likely to fail and there is a risk of blackout. The challenge is to maintain stability against the power grid to avoid situations such as blackouts. Given the potential threat, power professionals across the country have been enabled to consider safety grid security measures.


Sources say that the power demand will be reduced by 15000 MW due to the lights being off for 9 minutes. This will affect the frequency. Calibration management will be required in this situation and it is only a day off. The power grid is required to manage frequencies in the blackout state.

According to sources, the State Load Dispatch Center in Uttar Pradesh has written a letter to the UP Power Transmission Corporation giving suggestions on some issues for grid safety and easy power supply. The Center estimates that the power consumption will come down by 3000 MW due to the call of the Prime Minister. This may cause high voltage problems. The Power System Operation Corporation Limited has become active in view of this potential threat and is in contact with load dispatch centers at national and regional levels.


Former Electricity Secretary RK Shahi expressed concern that the power grid is capable of managing the reduction in electricity demand. He said that the power demand or load would be low, but there would be no instability if the frequency was properly managed. Meanwhile, as a precaution, power generation stations should also reduce production. The former power secretary called for an integrated approach to deal with the situation and said that the production can be increased when the lights are on.