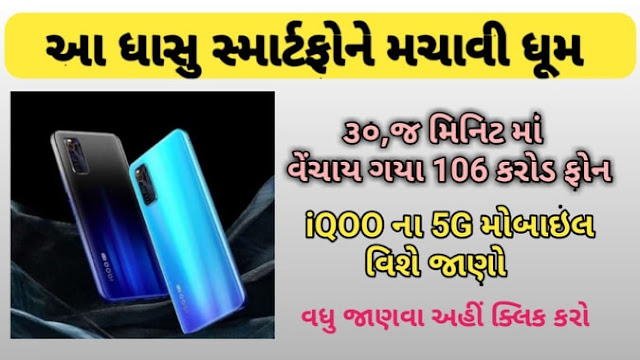 iQOO's latest smartphone Neo 3 5G is amazing. The company sold 100 million yuan (about Rs 106 crore) units in the first sale and that too in just 30 minutes. The first cell of the phone was on April 29 and the data of this cell has been released today by the company. The company is very happy with this record cell of new phones

The IQOO Neo 3 specification features a 6.57-inch Full HD Plus LCD panel. The phone has HDR 10 support. The phone comes with a refresh rate of 144 Hz and its aspect ratio is 20: 9. This phone is powered by Adreno 650 GPU with Snapdragon 865 chipset. The phone comes with UFS 3.1 standard storage. The phone is endowed with a special 11 level cooling system, which reduces the internal temperature by 10 degrees.


The phone comes with AI triple camera setup for photography. It has a 48-megapixel primary sensor, 8-megapixel and a megapixel macro lens. The phone has a 16-megapixel front camera for selfie. This phone coming with Android 10 operating system has a 4500 mAh battery. Which supports 44 watt fast charging.