Home
IPL for this reason decision

BCCI does not want to cancel the IPL for this reason, this decision can be taken for the tournament.

BCCI does not want to cancel the IPL for this reason, this decision can be taken for the tournament.


Corona has rallied around the world. More than 1.3 million people have died in the world so far. In India, this figure has crossed 400. So the current lockdown in the country has been extended till 3 May. The BCCI is yet to take a decision on the IPL. According to BCCI sources, the IPL has been suspended recently 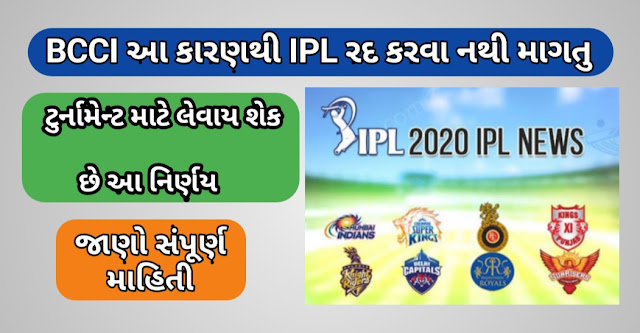 The sports world was shut down due to Corona
BCCI does not want to cancel IPL
However, no decision has been taken on IPL yet.


The BCCI will take a decision on the IPL only after 3 May. The BCCI does not want to take any major decision on the IPL in a hurry, as the BCCI and all franchise teams will suffer heavy losses due to not playing the IPL. The BCCI is monitoring the situation so that the tournament can be organized at a small level and avoid such a huge loss.


The BCCI did not put epidemic provisions in the insurance policy of the IPL. If the IPL is canceled, it will affect all franchisees, players, broadcasters. It could also be that players will not get money from playing IPL.

"The BCCI has a specific guideline," the official said. At present, nothing has been given to any player. The President of BCCI Players Association - Cricketers Association of India, Ashok Malhotra has admitted that the absence of one season of IPL will result in a major economic setback.


Another franchise official clarified that the players' salaries were not insured for the epidemic and were not included in the insurance terms. The salary amount of each franchise is 75 to 85 crores. How will we pay if IPL is not played? So now BCCI is also planning to create an alternate IPL window.