The possibility of a lockdown in Gujarat at any moment

The possibility of a lockdown in Gujarat at any moment

The state of Gujarat is heading towards a serious health crisis, the High Court said in its observation while filing Sumoto. Despite being on leave on Sunday, the Chief Justice of the High Court entered Sumoto in the late evening and set it for an emergency hearing at 11 am on Monday. 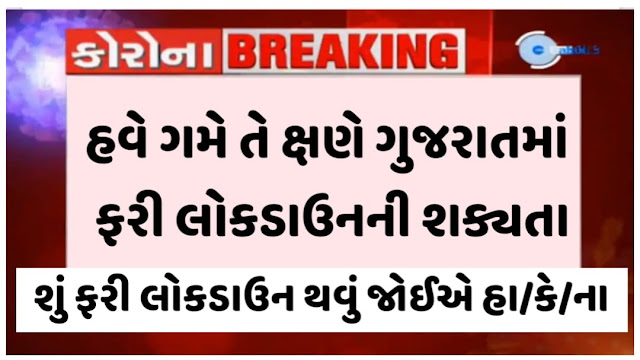 Benchmarks of the Chief Justice

Unfortunately, incredible difficulties have arisen in the state. The structural system that operates the corona has collapsed.

Which means a health emergency in the state. The court will have to intervene in this matter.

Currently the situation in the state is out of control. The hearing in the emergency phase will continue despite the High Court being closed in Teva.

The Gujarat High Court has been kept closed till the 18th due to Corona situation being out of control. However, a bench of the Chief Justice has set it up for immediate hearing tomorrow morning as the corona infection in the state is on the rise.

Chance of lockout in Gujarat at any moment

The Gujarat High Court took serious note of Coro's infection, citing the emergence of a health emergency in Gujarat. Late night there was a discussion between doctors and government officials that there could be a lockout in the state tomorrow. The High Court is likely to order the state government to stop the transmission of Corona and provide health facilities.