Of the 576 seats in the 6 municipal corporations of Gujarat, the saffron of the BJP is flying to 479 seats. While Congress won 59 seats and Aam Aadmi Party won 27 seats. So other parties have won 11 seats. 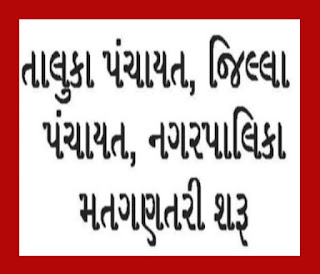 BJP's victory in all Manpa of Gujarat

Congress could not win a single seat in Surat Municipal Corporation

AAP press conference after local body election results. The AAP leader said, "We are grateful for the trust the people have placed on us." The people of Gujarat voted for us as the opposition. We will fight BJP where necessary. Arvind Kejriwal will come to Surat on 26th. Arvind Kejriwal will do a road show in Surat. AAP leader Jaideep Pandya said that AAP has come to change the politics of Gujarat. We will fulfill the great responsibility entrusted to us in Surat.

Kejriwal will reach Surat on February 26

Arvind Kejriwal will come to Surat on February 26 after the AAP victory. Will do road show in Surat. AAP has won 27 seats in Surat. Aam Aadmi Party President and Delhi Chief Minister Arvind Kejriwal tweeted, "Congratulations to the people of Gujarat for starting new politics."

There is saffron wave of BJP in all the constituencies of Gujarat, BJP is ahead in most of the seats.

The saffron of the BJP is once again flying in all the constituencies of Gujarat. BJP has got a record breaking edge in all the constituencies, after which there is a lot of enthusiasm among the BJP workers. A clear picture is emerging that the public has denied accusations of factionalism within the BJP. The BJP is preparing for a grand ceremony at JP Chowk in Khanpur.

BJP has won in Rajkot, the stronghold of CM Rupani. BJP is being slapped all over the city. The Congress was also reluctant to open an account in the city. But in Surat, which is the BJP state president's stronghold, a problem for the BJP is that the Aam Aadmi Party has made a strong entry in Surat. In many wards, Surat has become the second largest party after the Bharatiya Janata Party. In Surat, the Aam Aadmi Party was leading in 23 seats.

Rajkot Municipal Corporation was stoned by the Congress, after which City President Ashok Dangar resigned, accepting responsibility for the defeat.

More figures from polling in Sardarnagar, Ahmedabad, in the counting of votes, allegations of molestation, photos came viral, with allegations of voting of the Congress bayonet. In the enthusiasm of the BJP in the Ahmedabad Municipal Corporation with the pro-BJP result, Khanpur J.P. The BJP will celebrate the victory at the Chowk, with women activists instructed to appear in orange saris.

BJP state president CR Patil also wished victory. You have always believed in the Bharatiya Janata Party, the way the whole country is moving forward on the path of development has been possible only with your trust, support and cooperation.

'We will assess the results of Surat'

Regarding the election result, the BJP leader came. That. Jadeja said that the voters of Gujarat have supported the development and the Chief Minister will address a public meeting at Khanpur JP Chowk. He said that this is the result of hard work of our workers and 6 Manpa voters want to be with BJP. We will assess the results of Surat.