No permission from the police for the wedding

No permission from the police for the wedding

Addressing a press conference in Gandhinagar today, Home Minister Pradeep Singh Jadeja said that weddings and other receptions would have to be held within the limit of 100 people, but police approval was not required. 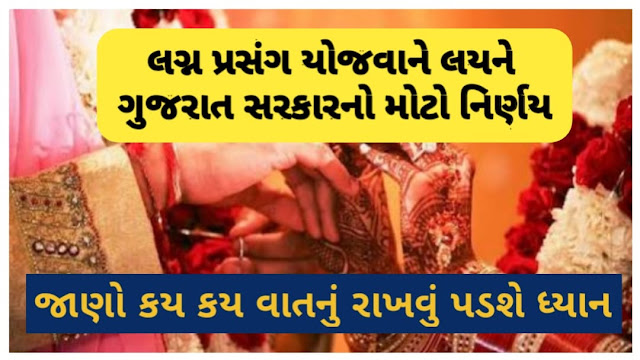 Police approval is not required for marriage.

Explanation of Minister of State for Home Affairs

He further said that citizens would have to organize any kind of ceremony within the 100-person limit. Also strict adherence to all types of protocols.

Big statement of bride and groom in marriage

Regarding the bride and phuleka at weddings, he said that there would be a ban on the bride or bandage on wedding occasions. Also, the planning of the ceremony will not have to take any kind of approval from the police station in your area.

Mandatory use of masks and sanitizers

Following the Corona guideline, Minister of State for Home Pradeep Singh Jadeja said that masks and sanitizers should be used in ceremonies, otherwise stern action would be taken.

The Deputy Commissioner of Police of Rajkot decided that no sanction was required for the marriage ceremonies to be held from 6 am to 9 am. He gave information about this by holding a press conference and an official announcement was also issued.

The highest number of 1607 new cases has been reported during the last 24 hours.

In particular, a total of 1,368 patients have recovered today against a new case of corona virus, with a total of 1,86,446 patients. Today the total death due to corona of 16 patients has reached 3922.

Concern has increased in Ahmedabad district with 353 cases

Today, 325 in Ahmedabad city, 28 in Ahmedabad district, 238 in Surat city, 61 in Surat district, 127 in Vadodara city, 40 in Vadodara district, 95 in Rajkot city, 44 in Rajkot district, 35 in Gandhinagar city, 31 in Gandhinagar district. And 31 cases have been registered in Banaskantha in North Gujarat. . In particular, after Ahmedabad, the situation with Corona in Surat has worsened. Local bodies are on high alert with over 1700 cases in the last five days in both cities.