200 people will be allowed in the wedding, will be implemented across the state from November 3

200 people will be allowed in the wedding, will be implemented across the state from November 3

The wedding season is starting in the state of Gujarat after the Diwali festival. The state government has allowed 200 people to attend the wedding due to the wedding season. It should be noted that earlier there was a rule that only 100 people can be involved in a marriage. But now Chief Minister Rupani has allowed 200 people instead of 100 as per Central Government guidelines. All precautionary rules will apply under this exemption. At the same time, preparations will be made to marry Dhoom. 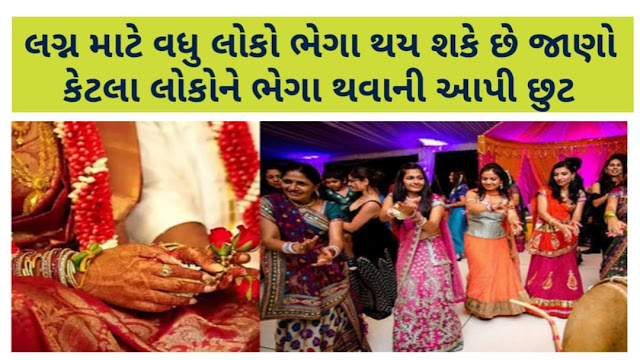 It is notable that limited people were previously permitted under the Corona period. A number of concessions have been made since the announcement of the unlock. Earlier, the guideline was announced to have only 50 members of a young girl's family willing to marry, then the hall, meeting room, party plot were announced as per KPCT. Now the government has announced a new guideline regarding marriage.

The concession will be applicable across the state from tomorrow, 3 November

Only 50 percent of the halls capacity will be allowed

Note that only up to 50 percent capacity will be allowed in the closed hall (banquet hall). It is worth mentioning that even in this concession, people have to follow the rules including wearing masks and social distance. The concessions will be effective from Wednesday.