Schools across the state have been closed since the lockout was announced in the state of Gujarat in March. It is dangerous to open schools for students who are still at risk of corona infection. Especially in primary school. Even after Diwali, there is still uncertainty about starting school for children below 6th grade. 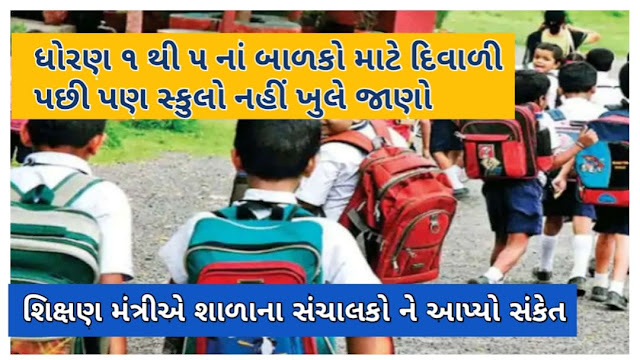 In a webinar organized between the state education minister, school administrators and primary education officials, various aspects of starting the schools were discussed and guidelines are being prepared by the Education Department on this basis.

After the Diwali holiday ended in November, STDs. Students in 10th and 12th grades may be allowed to attend school with certain conditions, although transportation may increase the likelihood of corona infection.

If the likelihood of corona infection increases, the government may make it a condition that the issue be discussed.

Suggestions were made for primary school students that on an experimental basis, urban area STDs. Students from 6th to 8th school are at a great risk after Diwali holiday, but they can be allowed to come to school if there is no question of open schools in rural areas and transportation near schools.

Government is considering this issue

But STD. For students below 6th grade, it is unlikely that education department officials said the schools would be reopened even after Diwali. Unit tests have been completed in schools and studies are continuing at home. Diwali holiday has been shortened this year as schools have been closed for a long time due to Corona