The state government has decided to extend it for one more year to improve the health of the citizens. 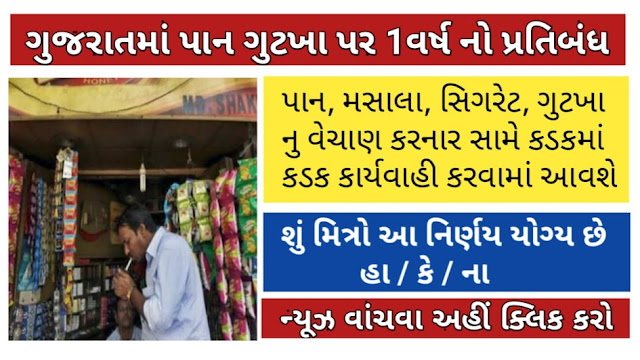 Zee Media / Bureau: A major announcement has been made by the Government of Gujarat for people consuming gutkha. The ban on tobacco, pan-masala gutkha in the state, has been extended for another year. Deputy Chief Minister Nitin Patel said that currently there is a ban on the sale, storage and distribution of gutkha as well as pan masala containing tobacco or nicotine in the state. The state government has decided to extend it for one more year to improve the health of the citizens.

The Deputy Chief Minister further stated that the ban has been imposed under rules and regulations under the Food Safety Standards Act-2009 and Regulation-2011. Under which it is prohibited to include tobacco or nicotine in any food item.

The presence of tobacco or nicotine in gutkha is very harmful to human health. This decision has been taken so that it is necessary to ban gutka to maintain the health of citizens and generations to come. It is noteworthy that after investigating about 10,000 firms in the state, a fine of Rs 11 lakh has been recovered so far.

He said that the state government had decided to ban the sale, storage and distribution of gutkha or pan masala which contained tobacco or nicotine. Strict legal action is taken against those who violate this rule.

The prohibition on the sale of tobacco or nicotine-containing cigarettes and substances within the 100 bars of a educational institution is strictly enforced. In this regard, in the last three years, the Food and Drug Regulatory System of the Department of Health investigated about 10 thousand firms and collected about Rs. A fine of Rs 11 lakh has been imposed.