After the announcement, the exam will be conducted only after the position of Corona for 9650 seats, where the examination has not been taken: Rupani 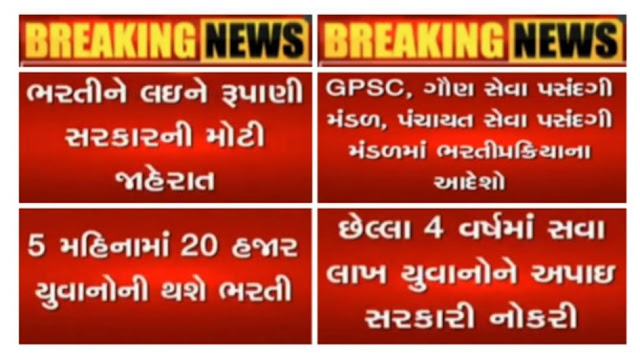 Advertisement was published for more than 9 thousand seats
As per the decision taken in today's meeting, the process including examination has been completed, but the entire process of vacancies where the result is yet to be announced will be completed in the next three to five months. In which the first phase of the examination has been completed and other stages are pending and for issuing appointment letters for the remaining 8 thousand vacant posts, it has been directed to complete the remaining process immediately and issue appointment letters. During the review it was found that advertisement for the recruitment of 9650 posts has been published, but the examination has not been conducted. Hence it has been decided to start such recruitment process after the corona situation is normal.

Order to issue immediate appointment letter for 8000 posts
He directed the state government to immediately issue appointment letters for the 8000 posts, which were earlier announced by various recruitment agencies, departments and the first phase of preliminary examination was completed, but other phases were pending. Promoting state employment and promising youth to get opportunities in government jobs in a timely and comprehensive manner.

Operation will begin as soon as the condition of Kovid-19 is normal.
He urged the state government to initiate the recruitment process for 9650 vacancies in various departments of the state government, which have been advertised, but the status of Corona Kovid-19 being normal is not investigated at the earliest. As a result of these youth-oriented decisions of Rupani, more than 20,000 youth of the state will get job opportunities in government service in the next five months.