CM Rupani has made a big announcement for farmers

CM Rupani has made a big announcement for farmers

The Gujarat government has made a major announcement for the farmers for the damage caused by heavy rains. Chief Minister Vijay Rupani has announced assistance to farmers worth Rs 3700 crore in the Gujarat Legislative Assembly. 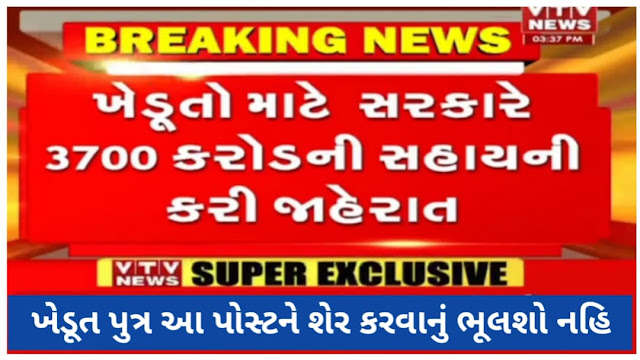 Presently, heavy rains in the state have caused heavy damage to the crop of farmers. Then Chief Minister Vijay Rupani gave a statement in the Legislative Assembly on this matter of public importance.

The Chief Minister said that Rs 3700 crore will be provided to the farmers. More and more farmer account holders will get help. In which 27 lakh farmers will be helped. 123 talukas of 20 districts will be supported. The farmer will be able to register online from October 1. The government has made a major announcement regarding the loss to farmers. Which has been welcomed by both BJP and Congress. It also appealed to activists and officials to help the farmers.

Regarding the assistance to farmers, Agriculture Minister RC Faldu said that the government had earlier conducted a survey. Assistance is decided on the basis of this survey. The rain in August has adversely affected the crop. The decision is based on survey reports. Surveys and conditions are taken into consideration. We have followed what he said. The Chief Minister has taken a decision with a lot of heart. The government stands with the farmers at the time of government disaster.

We will deposit money in farmers' accounts before Diwali: Faldu

Areas will be added according to the survey report. We will deposit money in farmers' accounts before Diwali. The survey report is still operational. Not a single farmer will be deprived.