Across the country, Corona has taken on a roaring appearance. The number of cases is increasing day by day. In Rajasthan, the Rajasthan government has implemented Section-144 in public places at district headquarters in 11 districts in view of the rising outbreak of Corona virus and has decided to ban gatherings of more than five persons. The decision was taken at a high-level meeting chaired by Chief Minister Ashok Gehlot on Saturday night. 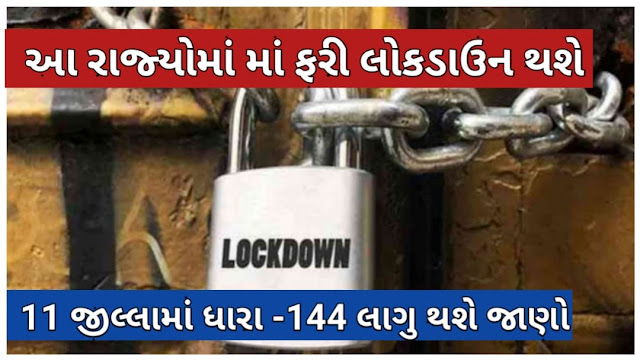 Section 144 is applicable in these districts
Considering the severity of the Kovid-19 infection, more than five persons gathered under Section-144 at public places in Jaipur, Jodhpur, Kota, Ajmer, Alwar, Bhilwara, Bikaner, Udaipur, Sikar, Pali and Nagaur district headquarters Will be stopped. . Wearing masks in public places and social distance rules should be followed. The Collector of the district concerned will issue an order in this regard.

Lockdown-like status until 31 October
Gehlot on Saturday decided to ban any socio-religious event across the region by 31 October, meeting with officials on the state of the Kovid 19 epidemic and its use to prevent it. According to a government statement, only 20 people would be allowed to attend the funeral and 50 people would be allowed to attend the wedding, but this would require prior notice to the local authority.


These rules should be followed in public places
The Chief Minister said that there is no shortage of life saving devices like oxygen beds, ICU beds and ventilators in any district. Rumors have been spread about this, which is unfortunate.

Gehlot directed to strictly follow health regulations including wearing masks and maintaining social distance at all public places to prevent an epidemic. He said that people should follow the resolution of 'no mask, no entry' in markets, offices, public transport, tourist places etc.