The corona test can now be done with your voice, prepared by the Mumbai Municipal Corporation.

The corona test can now be done with your voice, prepared by the Mumbai Municipal Corporation. 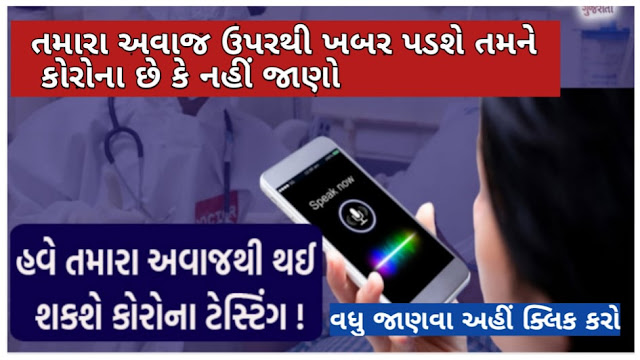 A unique experiment is being done by the Mumbai Municipal Corporation in which you will now be able to know by sound whether you have a corona or not. Next week BMC is going to use a new method to diagnose Kovid-19.


Mumbai Man Ed. Mu. Commissioner Suresh Kakani said, "We have started a pilot project of AL-based voice sampling application." About 1000 corona suspects and positive persons will be tested under the pilot project at the NASCO facility in Goregaon.

He stated that voice analysis had previously been used to test corona patients in France and Italy. Now a group of students from an engineering college in Navi Mumbai recently gave an analysis of the Corona Shanskapad 2008 voice sample.

Results in 30 minutes in a new antigen test

On the other hand, the RT-PCR test takes an average of 24 hours, while the new BMC antigen test takes 30 minutes. Rapid antibody blood tests performed in private hospitals can also quickly determine if a patient is infected with coronary heart disease. Although how effective these tests are, there are many questions.

The voice analysis method is not very sensitive, said a doctor who is affiliated with BMC. This can lead to many positive results. The BMC officer said that the entire voice analysis project is his initiative and the IIT team is helping him.

In this test, a person has to talk in an app on a smartphone or computer. The application already contains voice data from thousands of patients with Kovid-19 and other respiratory problems, with this database tracking the person's voice reading to track the situation.