Government has increased support for crop loss, profit will be in 4 hectare instead of 2

Government has increased support for crop loss, profit will be in 4 hectare instead of 2 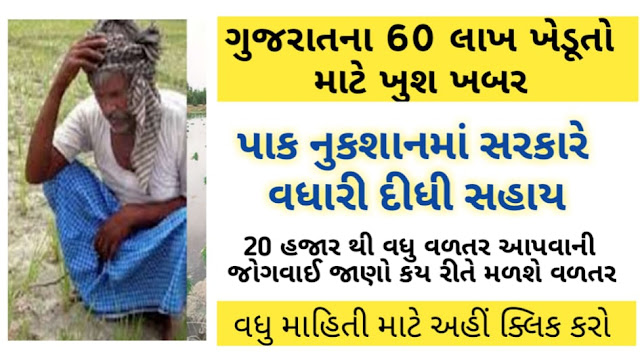 There is good news for the farmers of Gujarat. In which the Chief Minister has to announce a new assistance scheme to provide relief in crop loss to the farmers of the state. It is noteworthy that in case of loss of kharif crop, a provision has been made to give compensation of more than Rs 20,000 per hectare. Necessary compensation will be paid separately for losses of 50 percent and above.

Whereas in the new scheme to be announced by the government, the standard of relief has been increased to four hectares as well as more than 20 thousand hectares. It is to be mentioned that the final option of this new scheme has been given. Under which the offices of Agriculture and Farmers Welfare Department in the capital were continuously beating on the last day i.e. Sunday.

Offices of Department of Agriculture and Farmers Welfare continued to throb

In this case, according to high-ranking officials, the scheme is designed as an alternative to the crop insurance scheme. The scheme covers both 30 to 50 percent crop loss and more than 50 percent. The principle of compensation for loss in both phases has also been adopted. The plan will not be included in the relief disaster regulator of the government's revenue department, while the plan will be implemented under the aegis of the Director of Agriculture.

It may be mentioned that in the new Agricultural Loss Relief Assistance Scheme, the Government of Gujarat will provide additional relief from its own budget in addition to relief due to the world in case of crop loss based on the SDRF rules. It is noteworthy that farmers have been fighting against the government and insurance companies for crop insurance for quite some time. Meanwhile, a relief report has arrived. In 2019, when the standing crop suffered heavy losses due to unseasonal rains in October-November, the state government announced a massive assistance package of Rs 3796 crore to help the world. It is notable that the government relied on additional support from its budget.