If the government starts schools, there are plans to open like this

If the government starts schools, there are plans to open like this 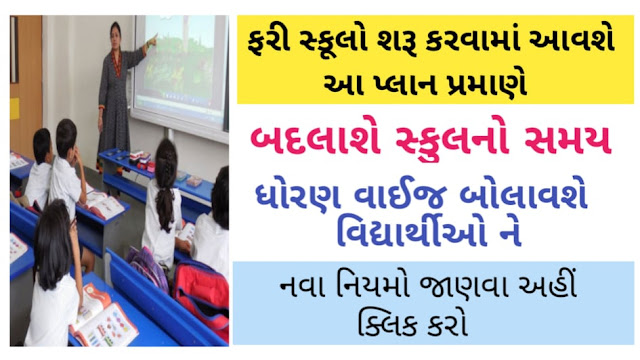 Corona virus figures are continuously increasing in the country. Schools may reopen in September when the number of corona in the country has crossed 20 lakh. Parents are still confused about sending their children to school. Also, questions are being raised as to when the schools will be reopened. If the government will start schools, then find out when in which state the scheme of opening has been started.


The government is considering that larger standards ie 10-12 schools can be started from September to November. As per the guidelines, opening of the first school for standard 10-12 is being considered. After this the standard 6-9 will be opened.

This is the government's plan to open a school

Standard 10 and 12 classes will be introduced first. With this, children will be asked to come to school. If the school has 4 sections of the same standard, the children will be called in 2 blocks each on an alternate day.

School hours will be reduced in half. This means that you have to go to school for 2-3 hours instead of 5-6 hours. The school will also be given 1 hour to clean the class. A total of 33 percent of the staff will be allowed to attend the school.

A decision will be made about the school later this month. The final decision will rest with the states. Each state has given its views and dates to the government on which date they can resume school.

There are many states like Maharashtra, Uttar Pradesh and West Bengal that have not decided when they can start school. Many parents are questioning the reopening of the government school as the country is not naming the suspension of Corona. "My son is studying in Delhi Public School," said a parent from Delhi. I am not ready to send my child to school at this time. If you take a year's break, it will work. But I cannot endanger the health of my child.