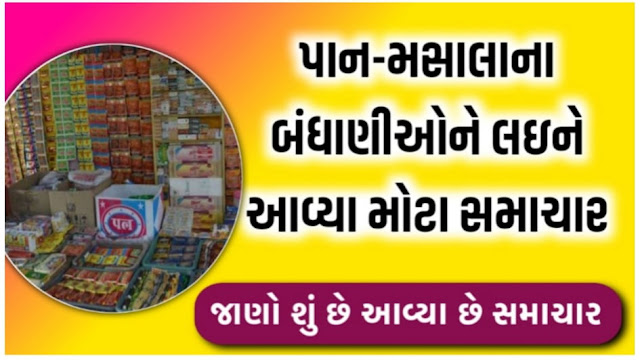 The number of corona patients in Surat is increasing day by day. Today is the third consecutive day that the Health Secretary Morcha is visiting Surat. Jayanthi Ravi visited Surat Civil. Jayanthi Ravi held a meeting with health officials in Surat. The meeting discussed controlling the corona. The border health secretary has given some hints after the meeting.

Pan-masala shops may be closed again in the state

We will close pan-masala shops in the area where the matter escalates: Jayanthi Ravi

In Surat, the problem of corona is increasing day by day. In Teva, Surat Health Front Secretary Jayanti Ravi visited the Katargam region. Then today, Health Secretary Jayanthi Ravi at the front gave some hints about the closure of pan-masala shops. Important news has emerged today for the manufacture of pan-masala. Pan masala shops in the state are likely to be closed again. The Secretary has given a sign in front of Health in Surat. We will close pan and spice shops in the area where the case escalates," he said. Along with this, pan-masala stores have started stocking.

Earlier, Jayanthi Ravi had said that the seating arrangement and habit of spitting on the road in the diamond industry could be one of the reasons for the rise of Corona infection.

Why are Corona cases increasing in Surat?

Jayanthi Ravi said that there are several reasons for increasing number of corona cases in Surat. But the diamond industry may be one of the reasons. One reason for this is the seating arrangement. People sit next to each other and grind diamonds. This increases the probability. Even today, in the prevalence of the city, I noticed that the system of wearing masks has improved slightly. Hence there is a habit of spitting, as well as adopting social distance, hence reducing the chances of infection. The densely populated areas may be due to a slight increase in numbers.

To get 600 more beds in Surat Kovid Hospital: Jayanthi Ravi

Health Front Secretary Jayanti Ravi held a press conference in Surat on the growing issue of Corona. He said that work has been started to expand the new system at Kovid Hospital. Surat Kovid Hospital will get 600 more beds. 180 new ICUs will be provided. Jayanthi Ravi visited Katargam and Varachha region. He spoke to an NGO for public awareness. The NGO will be able to conduct door-to-door survey. People will be informed about Corona.

Exact guidelines will come in case of examination: Jayanthi Ravi
He further said that the Kovid Community Isolation Center will be started. The Kovid isolation center will be connected to the hospital. Today 350 people have joined the home isolation. Medical, dental and para-medical examinations have been postponed. There will be specific guidelines in case of examination. Lockdown will be implemented where more cases will occur.