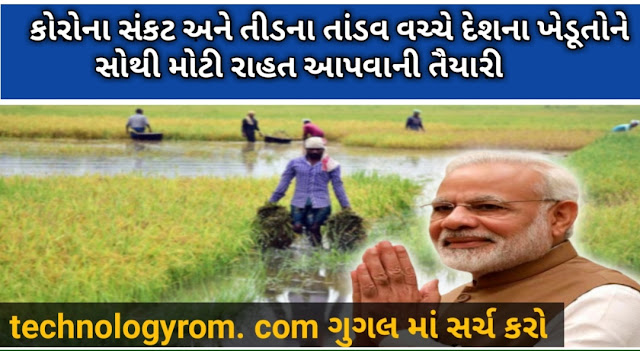 The country is going through a Corona crisis, which has had a tremendous impact on the country's workers and farmers. The center is reportedly working on a scheme to provide major relief to the farmers, as the grasshopper-infested farmers are shouting "trihamaam" as they are not getting the fair price of their produce due to lack of demand.

25000 crore relief in the first phase

Farmers in distress due to lockdown and subsequent locust attack

Modi government will give big relief to farmers

The Modi government may soon make a major announcement for farmers facing the Koro crisis. The central government is working on a loan waiver scheme of Rs 1 lakh crore for farmers across the country. According to a media report, the government will announce the scheme in phases. To provide relief to the farmers, a loan of Rs 25,000 crore can be waived in the first phase.

It is noteworthy that the corona virus has given a tough competition to the farmers. The demand for fruits and vegetables in the country has also declined due to the lockdown. Due to decreasing demand, farmers are not getting the price of the crop in the market. Apart from this, ready wheat, mustard etc. could not be sold during the season. Demonetisation has also led to an economic slowdown on farmers. In the mandi, farmers did not get a fair price for the crop. Onion is being sold in Delhi market at Rs 500 per quintal.

Many farmers are also tripping due to locusts in the midst of the Koro crisis. In states like Punjab, Haryana, Rajasthan, Madhya Pradesh, Delhi, Gujarat, there is devastation which is ruining the farmers. These grasshoppers are cleaning the fields one after the other in a swoop. If the government forgives debt in this way, they can get a big relief.


In particular, the Central Government has announced a self-sufficiency package to revive the economy, which has been crippled by the Corona virus. The package also advertises for agriculture and allied sectors