Home
IPL is the idea of ​​starting

The big news on the issue of IPL is the idea of ​​starting the tournament from this day.

The big news on the issue of IPL is the idea of ​​starting the tournament from this day. 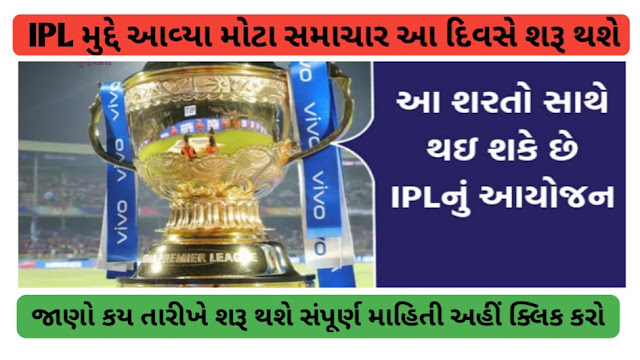 Several sports competitions have been canceled at home and abroad due to the transmission of the corona virus. Even the biggest league of IPL could not be held in India. There is also good news for cricketers when the country is gradually locking up. The Cricket Board of India is now planning to organize in September.

Discussion on IPL plan between September and November
According to sources, the decision on the league's plan will be taken based on Corona's position
A franchise official accepted the idea of ​​planning in September

Sources said that saying anything about this will now be a hasty statement as this situation has to be normalized first. But yes the Indian Cricket Board is considering organizing the league between 25 September and November. The only condition for organizing the league is that the corona be controlled in the country and the government should also allow it to be organized. The strategy is currently being worked out on these dates. In the same case, a franchise official has also considered that plans for the IPL are being considered by the end of September and November as there is a plan for at least one month to start the league.

The franchise official admitted that we have been told that a strategy is being formed in view of these dates. We are also making a policy keeping this in mind. However, all this will be determined by the position of Corona in the country. While another franchise official believes that the deadline is being considered, no information has been provided about the venue and arrangement of the match and nothing has been decided. It is to be noted that the board will have to be prepared for the arrangement of foreign players on joining the IPL, moreover, the board will have to take a major decision whether spectators will be allowed to come on the field or the match will be played in an empty stadium .

It is noteworthy that the T20 World Cup is to be held in the month of October. The match will be played in Australia from 18 October to 15 November. However, there are concerns about whether the World Cup will be held in time. If the IPL is to be held in September, preparations will have to start from August.