Home
20 lakh crores given by Modi

20 lakh crores given by Modi government to spend in this sector, to present blueprint to Nirmala Sitharaman

20 lakh crores given by Modi government to spend in this sector, to present blueprint to Nirmala Sitharaman 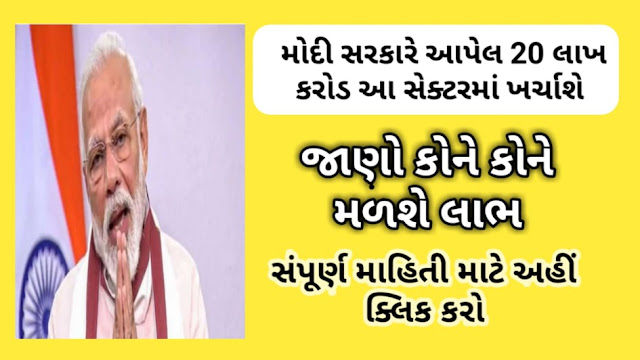 Prime Minister Narendra Modi addressed the nation for the fifth time on Tuesday amidst the Coro crisis and the lockout. In his address at 8 pm, PM Modi announced an economic package to bring the economy back on track. There is a total package of Rs 20 lakh crore including the old package. Also on May 13, Finance Minister Nirmala Sitharaman will announce where and how the economic package will be spent. However, many ongoing plans are also included in this package.

In his address, the Prime Minister said that the Rs 20 lakh crore package would provide a new impetus to the country's development journey in 2020. This New package is about 10 percent of India's GDP. Most importantly, this economic package is for those who are badly stuck in the Corona cycle. The Prime Minister clarified that this economic package would benefit cottage industries, small and medium enterprises, workers, farmers and the middle class. In addition, the economic package will also provide a new impetus to Indian industry.

The package of Rs 20 lakh crore for 2020-21 is Rs 10 lakh crore less than the approved budget of Rs 30 lakh crore. Now a big question arises that where will such a huge amount come from. Which will be given by the thing. However, it is clear that this package includes the already announced economic package.

There is a lot to clarify about the package.

Prime Minister Modi long ago gave the slogan of Make in India. The possibility of re-implementation in the middle of this corona blackout can be seen from this. Now the people of India will compete with Corona with their skills and expertise and become the savior of the sinking economy. This economic package will try to revive the economy. However, a lot is cleared with the package.

There will be something for each level

Chief Economic Advisor of the Finance Ministry, Sanjeev Sanyal said that every section of the society will benefit from the economic package. In an exclusive conversation with Aaj Tak, Sanjeev Sanyal said, "It is not a small package, it costs Rs 20 crore." This is more than the demand of the industry sector. We are trying to get something for every section of society. There will be something for each level.