Lockout will end on May 3! Know the answers of the ministers of 6 states.

Lockout will end on May 3! Know the answers of the ministers of 6 states.

Thirty days have passed since 40 days of lockdown in India, now everyone is watching if the lockdown will be removed from the country after 3 May. However, the number of corona-infected patients in the Patriot is steadily increasing. Let us know what the top ministers of 6 states of the country think about whether the lockout will be lifted on 3 May. 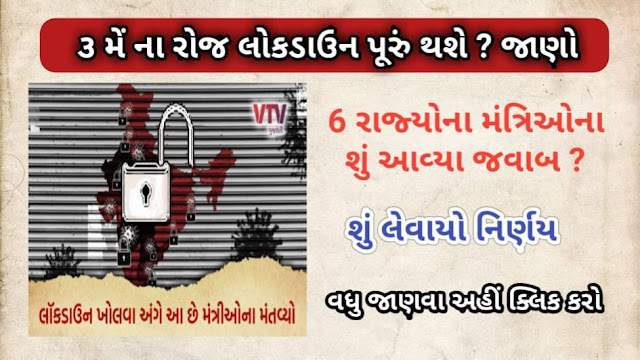 If the lockdown did not occur, the number of cases would have increased by 100 times
Lockdown phased out: Karnataka
It is difficult to say anything about the lockout: Rajasthan


Delhi is also one of the most affected states in the country and cases are increasing. Regarding the increase in lockdown, Delhi Health Minister Satyendar Jain says that the one-month lockdown in Delhi has ended. During this time, 2248 cases have been reported in Delhi. And the new cases are coming out, more people are recovering.

He said that experts say that if there was no lockdown, then such cases would have been 50 times or 100 times more. The one-month lockout is over. Corona patients take 28 days to recover from corona. He praised the lockdown saying that if the lockdown had not happened, people would not have been inside the house, the matter would have spread much faster. In other countries of the world, Spain, Italy, Germany, France, in many countries where there was no lockdown, there were fast cases. Later it was locked. He said that as far as lifting of the lockdown is concerned, there is still 10 days to wait.


With lockdown, people's livelihoods need to be considered: Sachin Pilot

Rajasthan Deputy Chief Minister Sachin Pilot said that it is not easy to say anything about increasing the lockout. People should think for livelihood. As far as Rajasthan is concerned, there have been many cases here. The interests of the people should be kept in mind. Remarkably, 1890 cases have been reported in the state.

Karnataka Deputy Chief Minister Narayan assured to increase the lockout. He said that saving life is the first priority. Lockdown may not be the biggest compromise. It should be removed in stages. The removal of the lockdown should be discussed with the Government of India. The lockdown has benefited, but people's livelihood should also be taken care of. There should be complete preparation to remove the lockdown. It should be lightened with a few steps. In Karnataka, there have been 443 cases of corona, in which 141 patients have been recovered and 17 have died.


Need to work in stages: Finance Minister of Kerala

The first case of corona was reported in Kerala, but today it is ranked 12th in terms of number of patients due to being controlled by the state. To promote the lockdown, Kerala Finance Minister Thomas Issac says that India is a big country. Countrywide lockout was carried out in the second phase to prevent corona from spreading. I believe that we should open up our economy. We need to work on it.

The worst destruction of Corona is being seen in Maharashtra. About 25 percent of the cases in the country are in this state alone. State PWD Minister Ashok Chavan says it will not be easy to say whether the lockout will be carried forward. A large number of corona cases have been reported in Maharashtra. The situation is very bad in Mumbai and Pune. In Mumbai alone, more than 3600 cases of corona have been reported. However the lockdown should open in other areas. The state government is continuously conducting sample tests and the number of tests is also increasing continuously.

To increase the lockdown, Uttar Pradesh Health Minister Jai Pratap Singh, who has the largest population, said that cases were still coming up in the state. But only the corona case comes out of the old case. There are fewer cases across the state than other states. Sampling and constantly checking outsiders. There are currently more than 150 cases of corona in UP.