In the lockdown, the Gujarat government has taken a major decision: from Monday, Rs. Will deposit 1000 directly

In the lockdown, the Gujarat government has taken a major decision: from Monday, Rs. Will deposit 1000 directly

The Corona crisis has increased in Gujarat. An important announcement was made by CMO Secretary Ashwini Kumar when 1272 corona cases were registered in one month and there were 48 deaths. It has announced to deposit Rs 1000 in the account of 66 lakh people. Along with this, some other important announcements were made. 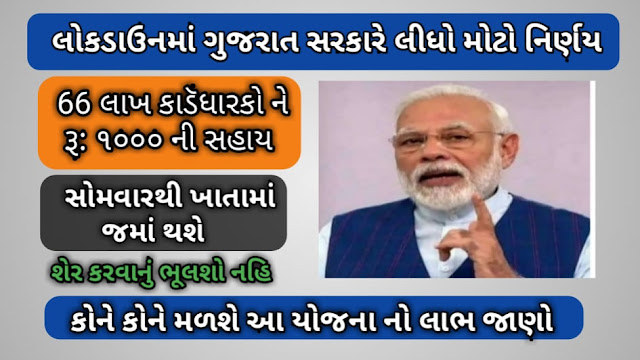 Money will be added to everyone's account
Work has started at 63 Marketing Yard
CMO Secretary Ashwini Kumar announced importance from the state government today. As of 3 May, there is a Corona crisis across the country. In this, the state government in Gujarat has taken an important decision, which has made a major announcement for 66 lakh card holders. Those who come under the National Security Food Act will get this benefit.


CMO Secretary Ashwini Kumar announced the importance of the government in a press conference today. He said that Rs. Announces 1000 assistance to 66 lakh card holders. Which will be credited directly to the beneficiary's account and no form will have to be filled for it. He said that this assistance will increase the additional burden of Rs 660 crore on the government.

No form will be required to be filled

Ashwini Kumar said that the assistance will be provided immediately and deposit will be started in the beneficiary's account on Monday. There is no need to fill any form to get this amount.

Giving information about the grain distribution system introduced for APL1 card holders, he said that people have benefited satisfactorily from this scheme. While some have voluntarily relinquished their rights, it will benefit more and more people. If some beneficiaries are left to get food grains, they will still get grain. Which means that the grain distribution has not stopped yet and the grains will be harvested in the coming days.


Oil mill will be commissioned

CMO Secretary Ashwini Kumar said that on the single issue, CM Rupani has discussed with the oil mill owners and collector to start a closed mill. In addition, CM discussed the video conference with the Commissioner of Ahmedabad. Gujarat government has sent Rajkot ventilator

With its help, the government put an additional burden of Rs 660 crore.