After 1 year, the decision of the Government of Gujarat issued a notification regarding Pan-masala and Tobacco-gutkha.

After 1 year, the decision of the Government of Gujarat issued a notification regarding Pan-masala and Tobacco-gutkha. 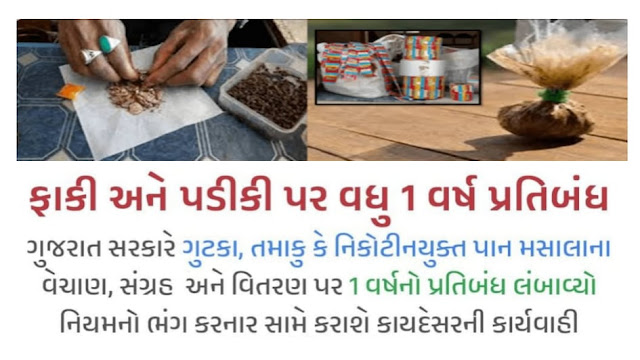 At present the sale, storage and distribution of gutka and pan masala containing tobacco or nicotine is banned in the state. This restriction is to improve the health of citizens

It has been told by the Food and Drug Regulatory Authority that it has been decided to extend it for one more year from September 09-2022.

Adding tobacco or nicotine to food is prohibited

This restriction has been imposed under the rules of Food Safety Standards Act-2006 and Regulations-2011. Adding tobacco or nicotine to any food is prohibited.

Action will be taken against those who break the rules

The presence of tobacco or nicotine in gutka causes great harm to human health. Therefore this decision has been taken because it is necessary to ban gutka to maintain the health of the citizens and the coming generation. Strict legal action will be taken against those who violate this rule.

Further, as per the list of Food and Drug Regulatory Authority Gandhinagar, any trader selling, storing and distributing gutka or pan masala containing tobacco or nicotine will face strict action under the law.