The situation is worsening in the BB wave of Corona virus in the country. The treatment situation in the country is deteriorating between infections. Every day more than three and a half million new patients are suffering from corona. The most worrying thing about the second wave of corona in the country is that this time young and young children are getting more prey. The Ministry of Health has issued separate guidelines for children for the first time in view of the fact that children are getting infected by this second wave of corona virus. 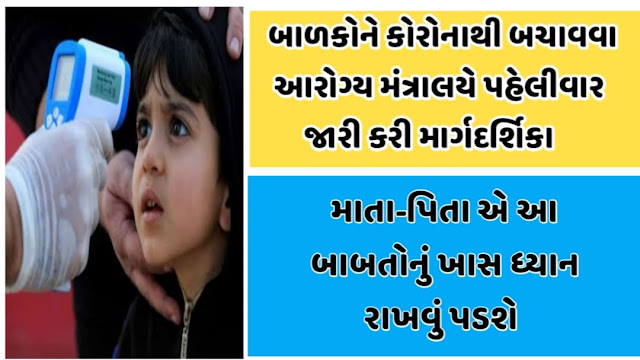 No treatment is recommended for children who have coronary heart disease, but do not show any symptoms of the disease (asymptomatic) but to look for possible symptoms. Two documents have been released by the Ministry of Health. One of which is a revised guideline for keeping children isolated at home and a pediatric age group for the treatment of children.

Mild - Guidelines for a mild infection

If the child has mild symptoms of infection such as a sore throat or pain, cough, but does not have difficulty breathing, keep the child at home. Drink as much water as possible to prevent dehydration. Insist on giving fluids to eat. In case of fever, give 10 to 15 mg of paracetamol. If you notice any dangerous symptoms, consult a doctor.

This category includes children who have low oxygen levels but do not have signs of pneumonia in the child. Children with moderate symptoms may be admitted to the Kovid Health Center. During this time, they need to be given more fluids so that dehydration does not occur. Also, avoid overhydration. Paracetamol may be given for fever and amoxicillin if there is a bacterial infection. If the state of oxygen in the child's body is less than 94%, then the child should be given oxygen.

It is a guideline in case of severe infection

Children at this stage may experience severe symptoms such as severe pneumonia, respiratory distress syndrome, respiratory distress, multi-organ dysfunction syndrome (MODS) and septic shock. Such children are advised to be admitted to ICU or HDU immediately. The guide recommends complete blood count, liver, kidney function tests and chest X-rays of these children.