The state government has decided to discontinue offline education for STDs 1 to 9 from Monday. Farmer leader Rakesh Tikait will reach Gujarat from Rajasthan today. Arrived at Ambaji at 11 am, will pay homage to mother Amba at Ambaji. He will then greet the farmers and at 2.30 pm farmers will communicate in Palanpur. Let's start the morning news brief… 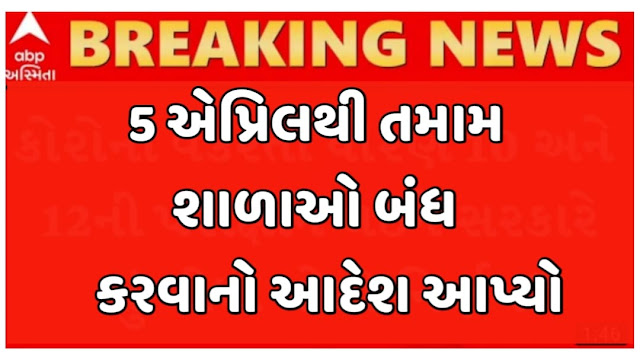 These 4 events will be monitored

The government stopped offline education in eight metros from March 18 to April 10 due to the increasing number of corona cases in the state. The decision has been made. Online learning will continue

Corona is now roaming in Gujarat. In just 24 hours, an all-time high of 2815 new cases has been reported. While 2063 patients have given corona in the last 24 hours. While 5 in Surat, 4 in Ahmedabad, 1-1 in Bhavnagar, Rajkot, Tapi and Vadodara, a total of 13 patients have died. Earlier on December 11, there were 13 deaths. The death toll in the state has reached 4552. Corona has a recovery rate of 94.03 percent in the state. At the same time, the number of active cases of corona in the state has crossed 14 thousand.

3) In Vadodara, Deputy Chief Minister Nitin Patel said, action will be taken against those making wrongly big bills, there will be no lockdown.

During his visit to Vadodara, Deputy Chief Minister Nitin Patel said that legal action would be taken against the administrators of the hospitals for hiring unnecessary patients to take large bills from the patients of Corona in private hospitals of the state. At the same time, he denied the lockdown, saying that if people wear masks and are vaccinated, the corona can be quickly controlled.

4) 20 deaths in Manpa Book in Rajkot in two days, funeral of 49 people in cemeteries as per corona guidelines, waiting for cremation

The number of corona cases in Rajkot is increasing day by day. The number of deaths from corona has also increased, but there is a discrepancy in the number of corona deaths recorded in government books and various cemeteries in the city. Divyabhaskar's reality check at Ramanathapara Cemetery resulted in 20 deaths in the city in two days. While 49 people are buried in the cemetery according to Corona's guidelines.

5) Vaccination of 4 lakh people daily in Gujarat, immunization of 1.75 crore people can be completed by 30th April

Corona vaccination is ongoing across the country, with more than 3 million people vaccinated daily. Gujarat is moving ahead with the goal of vaccinating 2.5 lakh people every day. More than 4 lakh people have been vaccinated in the last 2 days in Gujarat. In view of this, the rate of vaccination in Gujarat alone is 15 percent as compared to other states of the country. An estimated 1.75 crore people will be vaccinated against Corona by 30 April, meaning that 18 percent of the 6.48 lakh population of Gujarat will be vaccinated.

6) In a financial transaction in Palitana, the ushers sprayed petrol and burnt the youth alive, the condition of the youth is critical.

Weeders have been busted in Palitana in Bhavnagar district. Since the youth could not pay interest and principal on time, the ushers started collecting money. In the case of financial transactions, a young man was killed in Palitana by ushers by spraying petrol on him and burning him alive. The young man was recently admitted to Sarti Hospital in critical condition. He breathed his last on Saturday night.