Consideration of lockdown as cases of corona infection increase in Gujarat

Consideration of lockdown as cases of corona infection increase in Gujarat

There is a possibility of another lockout in the state in view of the ever increasing Koro epidemic. Now, a bench of High Court Chief Justice Vikram Nath and Justice Bhargava Karia has directed the government. Justice said that concrete steps were needed to prevent the eruption of Corona. It is necessary to break the chain of infection of the corona. The High Court has directed the government to impose a three to four day curfew across the state and take necessary decisions on weekend curfew. 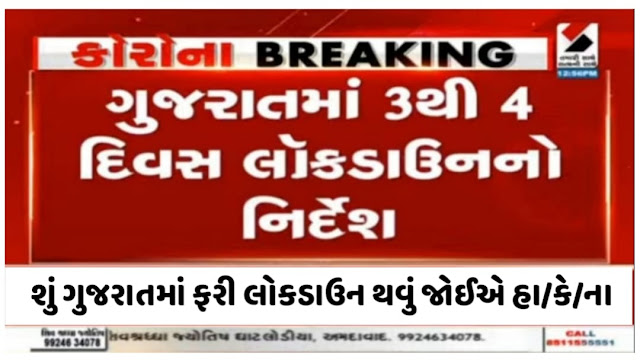 Corona infection cases are rising alarmingly in Gujarat. The state's corona recovery rate has also come down to 93.81 percent. Towns and villages with different markets in Tapasi, Valsad, Kadi, Jamnagar, Anand-Kheda, Morbi, Dahod, which were alert to increased infection, have announced voluntary lockouts.

On the other hand, the trade association believes that the government should now lock in the weekend to curb the corona as nighttime curfew in cities also affects trade, so the Indian Medical Association has decided to stop local infections. Has written a letter to Minister Narendra Modi. Partial lockout is appealed. The Gujarat government has also started seriously considering the matter and there is a possibility of a lockout in Gujarat over the next two days over the weekend.

Letter from IMA to Prime Minister regarding lockout

In a letter to Prime Minister Modi, the Indian Medical Association stated that currently the vaccine was the only way to control coronary heart disease. In a letter, the association asked the government to set up vaccine centers everywhere in the state to provide walk-in vaccines. Private hospitals, clinics, large hospitals and all doctors should be allowed to be vaccinated. In order to facilitate vaccination in the state, a Kovid task force should be formed in each district so that vaccination can be done properly.

In Gujarat, the business class is disheartened by the situation, including nighttime curfews during the Corona period. At that time, spontaneous lockout was taking place in many cities. In fact, the night curfew has given a tough blow to the business community in the state, but the way many colleagues including medical professionals have talked about spontaneous lockdown is also believed to be indirect government pressure. The Gujarat government has already announced that there will be no lockdown and no retreat, but this can lead to a lockdown-like situation. The Prime Minister himself has also asked officials to consider a mini lockdown; Then in Gujarat such a situation may arise gradually.

There should be a Saturday-Sunday curfew in the city

Most of the associations of Gujarat believe that trade and occupation collapsed economically and mentally due to the earlier closure. In the second wave of Corona, the government has changed the timing of the night curfew, which has proved to be financially detrimental to the business, particularly as the hotel-restaurant industry has been adversely affected by the night curfew. Officials of various unions have even told the government that the city should be given a five-day curfew on Saturday-Sunday, that is, Friday night from 11.00 am to 6 am Monday, so that Corona breaks its cycle. .