What date will schools and colleges start in Gujarat? Important Announcement

What date will schools and colleges start in Gujarat? Important Announcement

After Corona, there was a cabinet meeting in Gandhinagar today. Which is currently completed. Education Minister Bhupendrasinh Chudasama has made an important statement on the issue of opening schools in the state after Diwali. Bhupendrasinh Chudasama said that schools will open in Gujarat from November 23. Classes from standard 9 to 12 will be started according to SOP. It has also been announced to start teaching in colleges from 23 November. 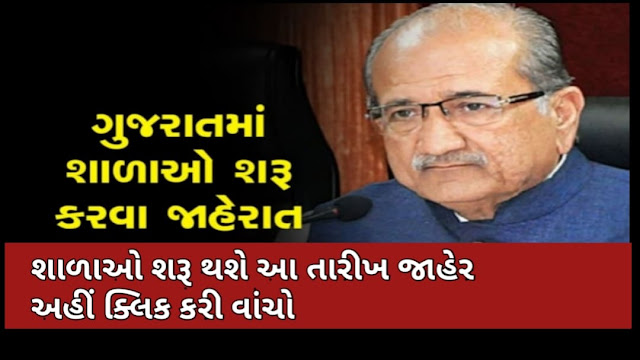 Education Minister said that classes 9 to 12 will be started as per SOD. Secondary, higher secondary, schools and colleges will start after Diwali, but institutions will have to seek the written consent of parents. Student attendance will not be considered mandatory. The colleges will also start teaching from 23 November. Educational work will begin in phases. The first medical, paramedical class will start in the college. Final year classes will be started at graduation. In colleges and schools, principals must follow the guideline. A form will be given to students for approval.

It may be mentioned here that the government wants to prolong the academic session after Diwali. Under normal circumstances the first session starts in the month of June and lasts for 105 days. The session ends with a 21-day Diwali holiday, but the second season will be 150 to 155 days, as the next session may be a waste of time. Given that the schools will open in late November, the next five months mean we will have to go to school by the end of May.

The government is preparing to invite students from 9th grade to 12th grade after the Diwali holiday. This year, Diwali holiday in schools in Gujarat has been held two weeks before, from 29 October to 18 November.

It should be noted here that the Gujarat government has to announce the decision today to start schools and colleges after Diwali. After the cabinet meeting, Education Minister Bhupendrasinh Chudasama has announced the opening of the school after Diwali. A core committee meeting was held yesterday (Tuesday) at the chief minister's residence, during which the issues to be discussed in today's cabinet meeting were discussed. Information about SOP prepared by the Department of Education will also be given.

The cabinet meeting chaired by Chief Minister Vijay Rupani has decided to resume education in secondary and higher secondary schools and colleges in the state after Diwali. Education Minister Bhupendra Singh Chudasama and Minister of State Vibhavari Bahn Dave gave the details of the decision. He said that school-college-educational institutions in the country including Gujarat were closed since March with the intention of stopping the spread of Corona virus Kovid-19. Under the guidance of the Chief Minister, the Education Department has successfully implemented an online learning system to ensure that the academic year and future of students are not wasted.

Under the visionary leadership of Chief Minister Vijay Rupani, public life, economic and industrial activities in the state have not stopped at various stages of closure and are now unlocked-1. Online education has ensured that school-college children meet students at home. Now the state government of Chief Minister Vijay Rupani has decided to resume educational work in schools and colleges in the state in compliance with the guidelines and guidelines of the Government of India in this unlock-5.

Before coming to the final conclusion of this decision, the government has taken a final decision by holding a round of meetings with various stakeholders like Department of Education, School-College, University Administrators-Teachers. This decision was approved in the cabinet meeting chaired by the Chief Minister today.

After Diwali, i.e. from 23 November, the cabinet has decided to start teaching in secondary-higher secondary and college-universities in the state. From Monday 23 November, classes from state Std-9 to 12 will be started with full compliance with the Government of India SOP guidelines.

Academic work will also start in colleges from 23 November.

Postgraduate, medical and paramedical classes will begin in the first phase in colleges and universities. Also, only the final year classes will be started for graduation.

Final Year and ITI And on 26 November Polytechnic College will also work.

Before commencing school-colleges, sanitation facilities in each campus, checking of students with thermal guns, soap for washing hands and soaps have to be ensured.

Not only are social distances maintained in classrooms and school-college campuses, masks are mandatory.

It is also important to ensure that medical services are available close to the school-college.

After the SOP of the Government of India, the online education system provided by schools and colleges in the state will be continued.

This SOP will apply equally to all government, grant-in-aid and self-finance schools, Kasturba Gandhi Balika Vidyalaya, Department of Social Justice and Empowerment as well as schools in the tribal development department of all boards of the state.

From 23 November, PG, medical-paramedical and undergraduate final year classes will begin in Std-9 to 12 schools in the state. The government will announce later to take appropriate decisions in time to start academic work of the remaining classes — standards.

Student attendance at school is not compulsory.