With the festive season now ushering in the Corona era, everyone is eager to learn what the government will do with the celebration of the festival during this epidemic. The state Announced  government has issued guidelines in this regard. 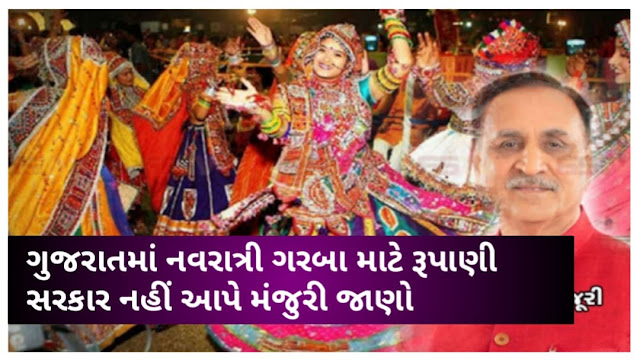 The government gave one hour for the puja aarti

Idols can be worshiped by worshiping them.

In the context of public health welfare, the state government has issued guidelines for the celebration of upcoming festivals.

These guidelines and decisions of the state government are to be implemented from October 16, 2020. According to the new guidelines of the government, no public garba can be held in the state during Navratri. However, the government has made concessions on the establishment of Mataji's Mandvi. At the same time, it is stated that during Navaratri, the garbi / idol can be installed and worshiped publicly in an open space, but photos or idols may not be touched or offerings are distributed.

It should be noted that all these SOPs must be complied with. It may be mentioned that social, educational games, entertainment, cultural activities, planning of religious ceremonies in areas other than the content area will also be permitted subject to certain conditions.

On the other hand, it is necessary that adult citizens above the age of 6, children under 10, pregnant mothers and persons suffering from other diseases do not participate in such ceremonies. If such ceremonies are held in halls, hotels, banquet halls, auditoriums, marriage halls, town halls or other closed places of caste societies, 50 percent of the capacity of such place or maximum 200 persons may be held.

In addition, apart from the content area, plans for social, educational sports, entertainment, cultural activities, religious ceremonies will also be subject to certain conditions. It is important to maintain a physical distance of 6 feet to follow social distance throughout the program. For which essentially floor marking has to be done. At the same time, it is mandatory to use an accurate and consistent mask throughout the program. In addition, an oximeter should be provided with a thermal, sanitizer. Also the stage, Mike, chairs have to be cleaned periodically. All these cases will be compulsorily applied. Also, the use of pan masala gutkha has been completely banned during public ceremonies and ceremonies as well.

There will be a limit of 100 people in the last ritual - ritual after death.

In large events like fairs, rallies, exhibitions, Ravana Dahan, Ramlila, Shobhayatra where large number of people gather, they will be banned.

In case of new violation of these instructions, legal action will be taken against the concerned venue administrator-organizer

Necessary arrangements will also have to be made to make medical facilities available immediately during all programs.

Navratri is a confluence of devotion to God and modernity. Garba and Raas are formed for nine days in this Navaratri in the coming month. Apart from this, religious rituals like Ramlila, Ramayana, Bhagwat Path are performed. And this is the reason that everyone appears filled with a new zeal and enthusiasm during Navratri. People join with enthusiasm in Navratri. It has now been finalized that the Navratri Garba will not be held in Corona this year.